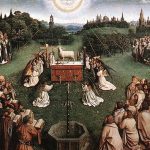 Blessed Cardinal John Henry Newman
Righteousness not of us, but in us 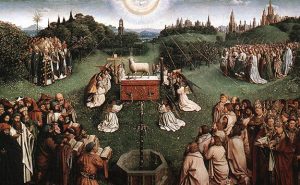 Growing up Protestant, I remember learning that salvation was something I didn’t need to worry about. Jesus’ sacrifice on the cross had freed us from sin and all we had to do was humble ourselves and acknowledge this fact. Of course, we went on living as Christians because we loved God, but that our salvation could ever be in jeopardy was unimaginable. Since we had accepted Christ into our hearts, not even God could reverse it.

In college, I met other Christians who believed similarly, but in practice regularly questioned whether they said the prayer to accept Jesus properly, who wondered whether they actually became Christians or were simply fooling themselves. Far from relieving anxiety, this belief about salvation seemed to exacerbate it.

This question – whether salvation is something God does or we do – is natural and necessary. It wouldn’t have been one of the main sources of the Church’s most bitter split if it wasn’t an important query. Moreover, if Scripture was straightforward and direct about it, there wouldn’t be a question. But the reader of Scripture often finds himself thrown by the wave of determinism and pulled back out by the undertow of Pelagianism (pride in our own effort).

That isn’t to say Scripture is the cause of confusion or heresy, just that it deliberately avoids simplicity. It refuses to say, “It’s all God, just sit back and relax,” or “It’s all on you. If you don’t obey, you will not be saved.” In other words, it avoids what St. John Henry Newman terms two other opposite errors: on the one hand pride, and on the other hand, fear and sloth.

It turns out that these two opposite errors share a cardinal flaw, according to Newman: “ . . . whatever their differences in other respects, agree in this,—in depriving a Christian life of its mysteriousness. He who believes that he can please God of himself, or that obedience can be performed by his own powers, of course has nothing more of awe, reverence, and wonder in his personal religion, than when he moves his limbs and uses his reason, though he might well feel awe then also. And in like manner he also who considers that Christ’s passion once undergone on the Cross absolutely secured his own personal salvation, may see mystery indeed in that Cross (as he ought), but he will see no mystery, and feel little solemnity, in prayer, in ordinances, or in his attempts at obedience. He will be free, familiar, and presuming, in God’s presence.”

This mystery, this tension between God’s grace and our effort, is what Protestant pastor and author Timothy Keller calls, “the tension that fuels the narrative” of Scripture. All throughout Scripture we wonder if God will exact his justice on Israel’s disobedience or if he will have mercy on them. This tension we witness in the people of God is the same tension that exists in our interior life. Most people, Keller says, tend to relieve the tension by choosing one or the other way out. They choose to say, “Yes, God expects something from us, but ultimately He just forgives us and accepts us,” or “Yes, God is merciful, but ultimately we have to act rightly and justly.”

But the one who resolves such a tension misses the ultimate point. Salvation is not a prize for effort or a free pass to live as we will; it is a Person with Whom we relate. Salvation is not a grade, a review or a paycheck. Because it is a relationship with God, it must be fostered with the love that every relationship on earth also requires – attention, time, effort.

When I was received into the Church, the personal God I had been introduced to in my childhood became more personal. I learned that a relationship can be strengthened or weakened, bolstered or broken. I am continually learning that, as Newman says, righteousness is not OF us, but it has been imputed IN us in our baptism. It is our duty and our privilege to maintain the intimate relationship He initiated, to fan the flame of love Christ placed in our hearts when we agreed to be buried with Him in His death and to rise with Him in His resurrection.

Today we can pray that God will give us the courage to struggle, to fight against our inclinations to pride ourselves on our good behavior or to conceal our errors. We can take solace in the fact that “What was actually done by Christ in the flesh eighteen hundred years ago, is in type and resemblance really wrought in us one by one even to the end of time,” and with confidence resolve to grow ever closer to the One who is our salvation. St. John Henry Newman, following the teaching of Church Fathers, explains that the Holy Spirit gives spiritual life through the sacraments of the Church. In this way, we allow God to dwell in our lives and build the Body of Christ.