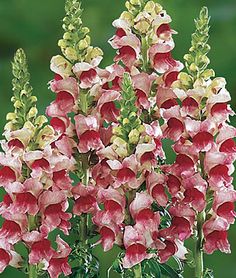 In the second half of  “Snapdragon: a Riddle for a Flower Book” Newman continues with a short catalog of “rarer”  or fancier flowers of favour (in contrast to the humble Snapdragon).

Flowers of favour! win and wear!

Rose of beauty, be the queen

In pleasure’s ring and festive scene.

Ivy, climb and cluster, where

Pride of birth and pomp of name.

Hide in earth thy timid gold.

Newman describes how roses have beauty and are wreathed in rings, while ivy climbs the trunk of the “lordly” oaks. Lily, symbol of purity, is known as a stately flower, while the gold colored Crocus, which, until it blooms, hides its “gold” flower beneath the snow, is called timid. The Dahlia, newly introduced in England in the 19th C, came from Mexico, hence “travell’d” bringing “Knowledge” from a “foreign coast.”

Newman next lists various earthly goods, which have accompanying floral symbols, or emblems, after which he will return to the Snapdragon.

These have each an emblem flower;

So for me alone remains

Be it mine to set restraint

On roving wish and selfish plaint;

And for man’s drear haunts to leave

Be it mine the barren stone

To deck with green life not its own.

So to soften and to grace

Of human works the rugged face.

Mine, the Unseen to display

In the crowded public way,

To shut out the Hand Divine.

Here the barren stone is decked by the Snapdragon, giving it green life … that is, “gracing” the stone, and softening the “rugged face” of the “human works,” the man-made walls. But then Newman has the Snapdragon claim something quite startling – the Snapdragon, while growing in stone walls, is displaying the “Unseen” to anyone who is in a  “crowded public way;” A busy life might keep a person from thinking of God. – This is an important line. The “Unseen” that the Snapdragon is revealing, is God, or God’s will –   Newman believes that Nature can point to the “Unseen” and participates by “beauty, grace, and perfection,” in God’s instrumentality, the dispensation of grace (PPS, 2:364).

Besides weaving in his philosophy of nature, Newman also does something metrically clever here in these lines, to add emphasis to what he is saying. The regular meter of this poem is broken in only one place, in all the over 60 lines – and it is here.  When the Snapdragon says that it can be found in other walls, that is the walls in crowded public places,  places where “life’s busy arts combine/ To SHUT OUT the Hand Divine”

Ah! no more a scentless flower,

Fragrance of the Syrian gale.

By the answering breath of Heaven!

In College cloister live and die.

To understand  the riddle in the poem,  we must turn to Newman’s autobiography, the Apologia Vita Sua, in which he equates himself to the Snapdragon, when referring to his time at Trinity College:

“Trinity had never been unkind to me. There used to be much snap-dragon growing on the walls opposite my freshman’s rooms there, and I had for years taken it as the emblem of my own perpetual residence even unto death in my University.” (A, 183).

These verses are the expression of Newman’s desire to live and die at Oxford, in the simplicity of the life of a scholar, caring for the souls of his students. He thought for a time he would, since he was appointed a tutor at Oriel in 1826, a year before these verses.  Just as the list of all the flowers were symbols or emblems of something else – the Snapdragon is the emblem of himself. The riddle is solved. But what of the “fragrance of the Syrian gale”? The Snapdragon releases its scent with a passing breeze, which for Newman expresses both humility and the Unseen … an act of submission by nature which will give evidence by fragrance to the Unseen, another metaphor for what John Henry desired for his life, through the emblem of the Snapdragon.

We know Newman did not stay at Oxford; God had other plans. Later developments would take him from this life, to the greater glory of God and the world.