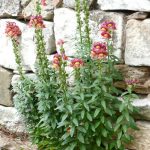 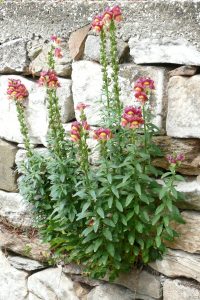 Poetry was important to Newman throughout his life. Within his poetry runs a thread of autobiography which gives an intimate insight into his feelings, his heart, and his mind. Knowing this makes reading his poetry all the more rewarding, like unwrapping a package. As we go through some of his poems, we can ask, “What can we discover about you in this poem, John Henry?  The poem, “Snapdragon: a Riddle for a Flower Book” brings a rich reward of discovery. It seems at first a straightforward poem in which Newman extols the beautiful simplicity of a Snapdragon, a sturdy and tenacious flower, native to both Europe and the middle east, a flower which is able to grow in stone walls.  The poem is told from the viewpoint of the Snapdragon and through the imagined voice of the Snapdragon, and the end of the poem will solve the “riddle” from the title, which will also bring us closer to Newman.

The pleasant sound of this poem, both to read and to hear, comes from its evenly metered mostly trochaic lines, that is, the syllables in the words in each line are arranged so they are in a repeated pattern of stressed and unstressed syllables.  (a trochee is two syllables, the first stressed, the second unstressed – like “AN-gel”). There are also a few iambic lines (an iamb is two syllables, the first unstressed, the second, stressed – like “for -GIVE”).  These metered lines follow the rhyme scheme of the couplet; that is, with each pair of lines, the final words rhyme. Newman amazingly used 27 different pairs of end rhyme, with only two repeated rhymes.  This meter and rhyme scheme is evident in the first 6 lines:

I AM rooted in the wall

Of buttress’d tower or ancient hall;

Cased in mortar, cramp’d with lead;

Of a living stock alone

Brother of the lifeless stone.

In these lines, Newman invites the reader to imagine the Snapdragon imprisoned in its cramped space – the only living thing in the wall,  “brother of the lifeless stone.” The poem continues, still in the voice of the Snapdragon, but then Newman contrasts the  “unprized” Snapdragon with fancier flowers – which he names and describes.

Else unprized, I have my worth

On the spot that gives me birth;

Braver flowers than me will yield,

Bold in form and rich in hue,

Children of a purer dew;

Choice are such,—and yet thou knowest

Highest he whose lot is lowest.

They, proud hearts, a home reject

Humble-I can bear to dwell

Near the pale recluse’s cell,

And I spread my crimson bloom,

Mingled with the cloister’s gloom.

Here, in the voice of the Snapdragon, Newman refers to fancy flowers, saying they “reject” a home “framed by human architect” – that is, the Snapdragon, happily lives in a man-built wall while the others must live in the soil or dirt of the field. This ability of the Snapdragon to live in stone means that it can live in all sorts of walls, as in a cloister – and brighten the gloomy walls with its crimson blooms. The Snapdragon, however, doesn’t mind.  “Highest he whose lot is lowest” and  “Humble-I can bear to dwell/Near the pale recluse’s cell.” The Snapdragon isn’t envious of the other flowers. It is content to brighten its surroundings without notice from the world. So in two separate lines, Newman has brought up the humility of the Snapdragon.  Newman struggled with pride — he wanted to obtain academic distinction. Here, though, we find  him praising the lowly Snapdragon for this trait he desired.