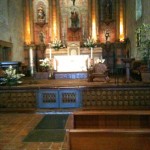 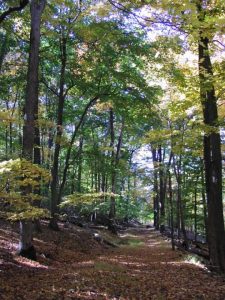 In the poem “Solitude,” Blessed John Henry Newman reminds us of the importance of silent time alone with God, so that we can, as the psalmist teaches, “Be still” and know that He is God. Newman loved spending time with family and friends, but he also relished his solitude, where he could converse with God and develop that primary and all-important relationship. This poem, written in iambic pentameter, with rhymed couplets, is lovely to hear.

There is in stillness oft a magic power

To calm the breast, when struggling passions lower;

Touch’d by its influence, in the soul arise

Diviner feelings, kindred with the skies.

In these lines, Newman writes that when one is struggling with the “lower passions,” one way to “calm the breast” is to have some silence … so that within the soul can arise “diviner feelings.”

By this the Arab’s kindling thoughts expand,

For this the hermit seeks the thickest grove,

Here, Newman refers to the quiet solitude one finds outside, beneath the skies, something that a desert nomad experiences, surrounded by desert sands; and also the solitude a hermit seeks, to “catch the inspiring glow of heavenly love.”

In the next lines, however, Newman speaks of something else quite remarkable that is found in the solitude of the outdoors. Yes, solitude helps one to “fix the heart on heaven” but, to “listening ears,” there is something else to be heard in the quiet! Heavenly, not mortal, music, angelic choirs, and especially, the music of the spheres! This music will lift us “high above all mortal care.”

It is not solely in the freedom given

To purify and fix the heart on heaven;

There is a Spirit singing aye in air,

That lifts us high above all mortal care.

No mortal minstrel breathes such tones around,—

That guides the rolling orbs along the sky,—

These lines speak of the ancient notion of understanding the world through harmony. Pythagoras and the Pythagoreans (500 BC) were the first to develop a sophisticated cosmology, teaching that the universe could be understood through numbers. They taught that celestial bodies, (Newman’s “rolling orbs”), moved in circles, an idea that was to survive for two thousand years. The Pythagoreans also believed that these heavenly bodies give forth musical sounds as they move: “the music of the spheres,” a music which humans can no longer hear because we have become used to it from childhood (a sort of background noise). The Pythagoreans believed that music was numbers and that the cosmos was music. Both St. Augustine1 and Boethius2 taught the existence of this heavenly music, as well as did the famous Johannes Kepler3, the genius Renaissance mathematician and astronomer who is known for formulating the laws of planetary motion. Kepler claimed he could hear the planets’ music – and he described it. He, too, believed that the order of the universe through numbers was an indication of the mind of the Creator. And so again to Newman:

And hence perchance the tales of saints who view’d

And heard Angelic choirs in solitude.

By most unheard,—because the earthly din

Of toil or mirth has charms their ears to win.

Alas for man! he knows not of the bliss,

The heaven that brightens such a life as this.

Newman returns to his theme: that “because of earthly din” — noise of work or of “mirth” which we allow to charm our ears – we cannot know this “bliss,” this heavenly music of the spheres and angel choirs which, if we would only “Be still,” both listen and pray, we would brighten our lives and turn us towards God.

1, 2  Both St. Augustine’s and Boethius’ theoretical treatises on music are entitled “De Musica”

3 Johannes Kepler’s Harmony of the World