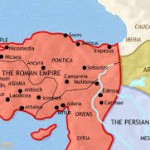 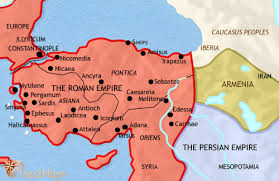 Christian life entails suffering, sometimes great suffering, and the response distinguishes a Christian from others: in the midst of hardship and even persecution he forgives and gives praise to God. Our saint was banished a second time from Constantinople, on this occasion to Caucasus[1], on the eastern slope of the Taurus, a mountain range in the south of modern day Turkey.[2]

He was led there by two soldiers who treated him well, but at the time of year in which he traveled the heat and dryness of the land made it a very difficult journey, one which would have been relatively easy on a government conveyance. Instead he traveled on a mule drawn cart. They passed the majestic Nicaea and traveled through the corn country of Phrygia to the city of Ancyra. On reaching this city they found devastation from Isaurian invaders[3] and traveled day and night for 200 miles to Caesarea, the capital of Cappadocia.

They faced much hardship including minimal supplies of food and drinking water. As a result Chrysostom fell sick with a recurring fever. Newman noted: “In spite of the indescribable confusion of the populations through which he passed, Christian zeal and charity did not allow their personal sufferings to interfere with the homage and interest due from them to the presence of so illustrious a confessor. They poured out upon his line of road to greet him and condole with him.” He wrote to Olympias about the love the people who, “broken with sorrow,” went out to the roads to see him. The saint remarked that if such was their sorrow how much more must be hers, yet he advised her: “Beware of surrendering yourself to the tyranny of sorrow.”

From Caesarea, where physicians treated him and his health recovered, he wrote to Olympias, a close friend and grand-child of one of Constantine’s ministers, complaining of not having received letters from her or other friends from Constantinople (the brother of a bishop had just arrived in Caesarea from Constantinople without any letters). Still, in the same letter he summed up his spiritual disposition: “Glory be to God for all things. I will never cease saying this, whatever befalls me.”

To another friend by the name of Theodora he complained that his wealthy friends did not do anything to make his exile closer to home and a better one, and of their silence. He wrote to her: “I am astonished at you,” he says; “this is the fourth, if not the fifth, letter I have sent you; and you have sent me but one. It pains me much to think that you have so soon forgotten me.” But as Newman explained some of these friends such as Tigrius had suffered torture and martyrdom in the meantime.

St. John looked forward to peace at Caesarea and, although Pharetrius, its bishop, made pretensions of friendship, moved by jealousy of the people’s admiration for Chrysostom, Pharetrius soon forced him to leave. At a moment when the Isaurians were threatening the city a mob composed of monks surrounded the house where Chrysostom stayed and compelled him to leave the city. Newman explained: “There was a vast number of fanatical monks at that day, whom the Church did not recognise, and who were exposed to the influence of any wild calumnies or absurd tales which might be circulated to the prejudice of Chrysostom.”

Recalling the suffering and peril endured in his escape and travel from Caesarea to Caucasus, Chrysostom wrote: “Who can describe the other troubles which befell me on my journey—the alarms, the risks? I think of them every day, and always carry them about with me; and am transported with joy, and my heart leaps to think of the great treasure I have laid up. Do you rejoice also over it, and give glory to God, who has honoured me with these sufferings.”

He felt the need to tell his friend and, through her other friends, that he had regained his health, and that he was not suffering from the cold winter climate or from the threat of the Isaurians who had returned to their country. His only fear was from the bishops, except for a few, who wished to harm him.

Again Chrysostom complained of not receiving letters from his friends, even while they could complain likewise, not having received his letters. For instance, he wrote to Olympias: “How is it that you say, you have received no letters from me? I have sent you three; one by the soldiers of the prefecture, one by Antony, one by your domestic Anatolius: they were long ones.” Persons, including holy men and women, can suffer at great lengths except for feeling forgotten by friends or not hearing from them. Chrysostom reminds us thus of the value placed on friendship, and how true friends sustain one another in suffering, whether in person or in writing.

There is yet another equally important lesson – that at times Christians will suffer persecution at the hands of fellow Christians, even bishop and monks. And that saints try to see in this the hand of God some higher purpose, and, like St. John Chrysostom following in the footsteps of St. Paul, try to rejoice in their suffering and to give glory to God by the manner in which they embrace the Cross and forgive others.

[1] This ancient city is modern day Göksun in the Mediterranean region of Turkey. Later on he was sent further away to the Caucasus, on the eastern coast of the Black Sea.

[2] This is a continuation of various posts on St. John Chrysostom by John Henry Newman from Historical Sketches, first published in the Rambler (1859-1860).

[3] These were descendants from Cilician pirates, once suppressed by Pompey who in the reign of Constantius began to devastate the land.