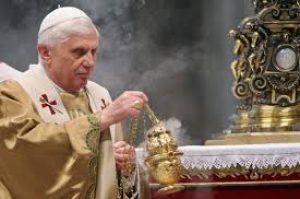 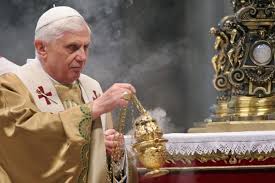 Pope Benedict XVI sent to the Bishops of the world, on 7 July 2007, his Apostolic Letter “Summorum Pontificum”  issued motu proprio regarding the celebration of the Roman Rite according to the Missal of 1962, the Roman Liturgy prior to the reforms of 1970. Summorum Pontificum will be a lasting legacy of his pontificate. Of the many striking and beautiful things found in the letter, one particular sentence stands out and has been often quoted. The late pope wrote, “”What earlier generations held as sacred, remains sacred and great for us too, and it cannot be all of a sudden entirely forbidden or even considered harmful. It behooves all of us to preserve the riches which have developed in the Church’s faith and prayer, and to give them their proper place.” One such member of the “earlier generation” is St. John Henry Newman.

At the time Newman lived and wrote, this is the Mass which formed him as a Catholic. He did not write systematically on the liturgy, but we know from several places how he felt about the Church’s highest form of prayer, Holy Mass. When a move arose to shorten the prayers of Mass, he wrote convincingly that time spent at Church in prayer at the Mass was a good way to discover how serious we are about spending time with Our Lord. In his sermon,  “Profession without Hypocrisy,” St. Newman wrote:

“If any one alleges the length of the Church prayers as a reason for his not keeping his mind fixed upon them, I would beg him to ask his conscience whether he sincerely believes this to be at bottom the real cause of his inattention? Does he think he should attend better if the prayers were shorter? This is the question he has to consider”(PPS, vol. 1.11).

In this sermon Newman carefully exposes the faulty thinking in the proposition that shorter prayers are better for the faithful. What is lacking, Newman explains, is within the person who finds the prayers too long. He thought that the prayers of the liturgy were to be preferred to other prayers or sermons. These Mass prayers convey religious truths that cannot be improvised. One of the advantages of the older liturgy is that it dissuades from improvisations made even by well intended priests. An observation made by Pope Benedict XVI regarding the new liturgical norms is something he found objectionable: they allow for ad libitum changes in the Mass.

“Heaven then is not like this world; I will say what it is much more like, — a church. For in a place of public worship no language of this world is heard; there are no schemes brought forward for temporal objects, great or small; no information how to strengthen our worldly interests, extend our influence, or establish our credit. These things indeed may be right in their way, so that we do not set our hearts upon them; still (I repeat), it is certain that we hear nothing of them in a church. Here we hear solely and entirely of God. We praise Him, worship Him, sing to Him, thank Him, confess to Him, give ourselves up to Him, and ask His blessing. And therefore, a church is like heaven; viz. because both in the one and the other, there is one single sovereign subject — religion — brought before us” ( PPS vol. 1.1).

It is clear then that Newman found beauty and solace in the Mass. It is because of this very understanding that Pope Benedict sought to clarify his position regarding this venerable Mass of Newman’s time and the post-Conciliar Mass of Paul VI. He made it one of his priorities to introduce the ‘hermeneutic of continuity’ to show that the pre-conciliar liturgy of the 1962 Missal is the same liturgy as the Roman Missal of Pope Paul VI. For this reason, he termed the, Traditional Latin Mass “The Extraordinary Form of the Roman Rite” and the post conciliar Mass of Paul VI he termed “The Ordinary Form of the Roman Rite.” As Bishop Conley of Nebraska wrote, “Pope Benedict desired the traditions to harmonize … so the cross-pollination could take place; the very best of the reforms of the post-conciliar liturgy could be enhanced and influenced, by an open, unbiased acceptance of the Mass that preceded it.” Pope Benedict described his goal of a slow and gradual process that was meant to begin with Summorum Pontificum and could eventually result in a “mutual enrichment” of the two forms.

Newman’s love for Mass is evident, writes Fr. Michael Lang, of the Oratory of St. Philip Neri in London. He notes that Newman’s love for the Mass is evident in his novel Loss and Gain: The Story of a Convert, published anonymously in 1848. In this novel, there are descriptions of Mass and Benediction by the Catholic converts Willis and Reding, which are autobiographical. Fr. Lang  writes that we know of Newman’s love of the Roman Breviary before his conversion, since he prayed  the Divine Office daily at Littlemore. This prayer of the Church was very influential in his subsequent conversion. (quoted from “St. John Henry Newman and the Liturgy“ in Adoremus Bulletin).

It is clear that both of these scholar priests, St. John Henry Newman and Pope Benedict XVI, realized that the Mass is, as Vatican II emphasized, “the source and summit of the Christian life.”  The Catechism of the Catholic Church teaches, “In the Eucharist the sacrifice of Christ becomes also the sacrifice of the members of his body. The lives of the faithful, their praise, sufferings, prayer and work, are united with those of Christ and with his total offering, and so acquire a new value” (CCC, no. 1368).

For a more complete study of Newman and the Liturgy, see “From the Book of Common Prayer to the Sacrifice of the Mass and the Roman Breviary” by Fr. Uwe Michael Lang and Fr. Juan R. Vélez, Chapter 21 in “A Guide to John Henry Newman: His Life and Thought” published by CUA Press.