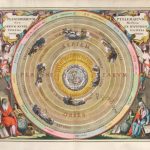 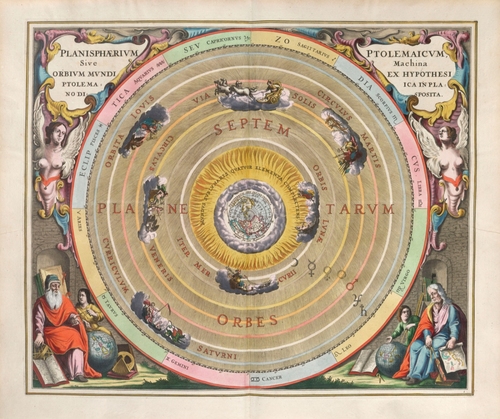 Have you ever heard of the lovely phrase, “The Music of the Spheres?” The ancient Greek theory of a harmonious created order in the universe was originally conceived by Pythagoras (570 BC- 495BC), whose eponymous mathematical theorem most people still remember from grade school. There were many and varied parts of Pythagoras’ theory of universal harmony, the music of the spheres being only one aspect. That the planets and other spheres in the cosmos gave off musical sounds as they traveled in their orbits simply reflected that they were part of universal harmony from the numerical ordering by a creator God. The notion of planetary music was accepted for over 2000 years. The Christianizing of Pythagoreanism allowed it to be influential into the Christian era, up to and including the 19th century during the age of St. John Henry Newman. His classical education at Oxford would have introduced him to the idea of “Harmonia Mundi” or The Harmony of the World.

In one of his University Sermons, Newman spoke of  “Music a Symbol of the Unseen:”

“LET us take another instance, of an outward and earthly form, or economy, under which great wonders unknown seem to be typified; I mean musical sounds, as they are exhibited most perfectly in instrumental harmony. . . . . [yet] is it possible that that inexhaustible evolution and disposition of notes . . . so various yet so majestic, should be a mere sound, which is gone and perishes? Can it be that those mysterious stirrings of heart, and keen emotions, and strange yearnings after we know not what, and awful impressions from we know not whence, should be wrought in us by what is unsubstantial, and comes and goes, and begins and ends in itself? It is not so; it cannot be. No; they have escaped from some higher sphere; they are the outpourings of eternal harmony in the medium of created sound; (they are echoes from our home; they are the voice of angels, or the Magnificat of saints, or the living laws of divine governance, or the divine attributes; something are they besides themselves, which we cannot compass, which we cannot utter,—though mortal man, and he perhaps not otherwise distinguished above his fellows, has the gift of eliciting them.”

In this sermon, Newman is making reference to “the music of the spheres.”  His claim that the power of sound and eternal harmony come from a “higher sphere” points to something that Newman was keenly aware of and wrote about all his life,  the unseen world, that invisible world that we profess to believe in the creed. The world of sight and the ordering of the visible universe pointed to the ordering of this invisible world, all a reflection of God’s glory.

But just as the eternal harmony is laid out by God, so too can He break this harmony, if He so chooses. The opposite of this eternal harmony or tuning of the stars is their untuning. In one of Newman’s Discourses to Mixed Congregations # 15 “The Infinitude of the Divine Attributes,” he writes about sceptics who deny Christ’s miracles:

“They have denied the miracles of apostles and prophets, on the ground of their marring and spoiling what is so perfect and harmonious, as if the visible world were some work of human art . . .  But He, the Eternal Maker of time and space . . . as if to pour contempt upon the . . . speculations of His ignorant creatures about His works and His will, in order to a fuller and richer harmony, and a higher and nobler order, confuses the laws of this physical universe and untunes the music of the spheres. Nay, He has done more . . . out of the infinitude of His greatness, He has defaced His own glory, and wounded and deformed His own beauty—not indeed as it is in itself, for He is ever the same, transcendently perfect and unchangeable, but in the contemplation of His creatures,—by the unutterable condescension of His incarnation.”

This incredible passage about God’s love for humanity that only He Himself could enter into the realm of His own created order, for the purpose of humanity, is beautifully imaged in Newman’s  phrase “untuning the music of the spheres.” This untuning may be what St. Paul refers to when he writes “for the creation was subjected to futility, not its own will but by the will of him who subjected it in hope; because the creation itself will be set free from its bondage and obtain the glorious liberty of the children of God’ (Rom 8: 19-21).

For God, indeed, the eternal generator of all order, the creator of time itself, can choose when, where, and how, to enter into His creation, for the purpose of winning us to Him. Be it by miracles or by sending Christ into time, to live and die in time, was God’s choice. And when at last the Angel Gabriel will blow his trumpet to announce the second coming, the sky will be untuned for the final time because, in the words of poet John Dryden, “The trumpet shall be heard on high/The dead shall live, the living die/And music shall untune the sky.”

God’s final act will be to upend all the world He created for man, that world given to us in order that He could reveal Himself to us, and draw us to HImself. Time on earth will end, and there will be no more division between the visible and invisible world. We know not the hour when the end will come, but we must prepare always for that trumpet sound. Lent is a good time to put our visible life in order, so that we will be ready for that final untuning.