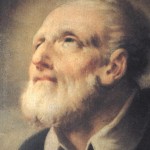 Today the Church honors a great saint, Philip Neri (Filippo di Neri), who countered the decadent culture of his time with humility, charity and truthfulness. Philip (July 21, 1515 – May 25, 1595), was an Italian priest noted for his piety and charity and for founding a society of secular clergy called the Congregation of the Oratory.

Centuries later Blessed John Henry Newman, inspired by his holy life, took him as a spiritual patron and, together with some of his convert friends, joined the Congregation of the Oratory, and founded an Oratory in Birmingham, England. In 1850, in a sermon on the feast day of St. Philip, Newman addressed the members of the Oratory outlining the life and virtues of St. Philip.

In a series of short posts we will look at Newman’s sermon, “The Mission of St. Philip,” contrasting him with Savonarola, another Florentine reformer. Newman begins describing the time in which these men were born, a time when unworthy prelates in Rome and powerful ruling families in Florence disgraced the Church.

While maintaining the assistance of the Holy Spirit in matters of faith and morals Newman was candid about the sinfulness of the Church’s prelates:

The Church “nevertheless was at this time so environed, so implicated, with sin and lawlessness, as to appear in the eyes of the world to be what she was not. Never, as then, were her rulers, some in higher, some in lower degree, so near compromising what can never be compromised; never so near denying in private what they taught in public, and undoing by their lives what they professed with their mouths; never were they so mixed up with vanity, so tempted by pride, so haunted by concupiscence; never breathed they so tainted an atmosphere, or were kissed by such traitorous friends, or were subjected to such sights of shame, or were clad in such blood-stained garments, as in the centuries upon and in which St. Philip came into the world.”

Florence, St. Philip’s birthplace, was the leading city of Italy. The social and political life of Florence, ruled by the Medici family, were just as decadent and damaging to religion as that of some of the Church’s prelates.

Newman writes: “Florence was at that time the most intellectual, the most magnificent city of Italy. About a century before, one of its richest merchants and bankers had become its virtual ruler, and had transmitted his power to his descendants, who still possessed it. The history of this family is intimately connected with that of the Holy See; at times they were its enemies: they ended in giving to it three or four princes of their own blood to fill it: but whether in alliance with it or at war, whether at Florence or at Rome, they exerted, at least for many years, an influence prejudicial to its real, that is, its religious well-being.”

In the wake of the fall of Constantinople to the Turks Florence became the haven for Eastern scholars and the place for revival of classical learning. The Medici became patrons of the arts; public schools were founded; Greek was studied, and a library was founded at the Dominican Convent of St. Mark.

Newman comments that this revival of learning, in itself good, was followed with intoxication for newly found knowledge, as well for discoveries and the news of riches in North and South America. According to Newman the Church was lacking “in order and discipline, in pastoral vigilance, in the sanctity of her individual members” to meet the challenges of the day, to put in perspective the good things achieved through human learning, science, works of genius and discoveries.

“So it was at the time I speak of; what was beautiful was placed before what was true; or rather, the beauty of the creature was preferred to the transcendent beauty of the Creator. Nature and art, the rich material, the creative mind, were suffered to invade and oppress the Church, instead of ministering to her. The world entered her sacred precincts forcibly, and embellished them after its own fashion. It addressed itself to her rulers, who were already enervated by the homage of nations; and it attempted to persuade them to disguise the awful Bride of the Lamb in an old heathen garb, of which her very coming had long since been the destruction.”

Under wealthy Florentine families, Florence became a pagan city given to festivals and carnivals with their accompanying excesses and vices, political feuds and a misguided renaissance. “Good and evil, sacred prerogatives and sinful hearts, were brought into close contact, marvellously and awfully. The Sovereign Pontiffs were familiarly dealt with, and then slandered behind their backs by the profligate artists whom they had benefited.”

In this worldly environment God raised holy men and women to turn people’s hearts back to God. “Holy men grew up and won their crowns, out of families on which history has set its note of shame. Two saints, contemporaries of St. Philip, will occur to you, my dear Fathers, as instances of this portent:—St. Francis Borgia, the third Father-General of the Society of Jesus, bears a name, shameful in the history of Rome; St. Mary Magdalene of the Pazzi came of a Florentine stock infamous  for a deed of combined sacrilege, bloodshed, and treachery perhaps without a parallel.”

It was in these times and circumstances that two other reformers came to the scene: Savonarola and shortly afterwards Philip. The next short essay will recount Newman’s description of Savonarola’s effort to reform Florence. In closing, however, a parallel should be drawn with our times in the Western world where the old gods of mammon and pleasure reign supreme, and science often becomes a pseudo-religion. Right reason succumbs to feelings and public opinion, and piety to sensual gratification. The institutions of marriage, family and government are overturned by a new tyranny of relativism.  These times have given birth to new saints such as St. Josemaría Escrivá, St. Gianna Barreta, St. John Paul II and St. Theresa of Calcutta, who rejected this modern paganism: defending the right use of freedom to love God and mankind, upholding the dignity of every human being and sanctifying family life and work.