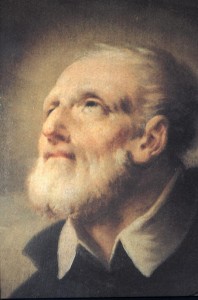 St. Philip owed a great deal to St. Ignatius, telling one of the latter’s disciples that he had learned how to do “mental prayer” from St. Ignatius. He even considered being admitted to his Society of Jesus and going as a missionary to India.

Both shared a vision of the spiritual life, which without being exclusive to persons living in the world, suited better those living among men in society than those living in religious communities. Newman summed it up in the following terms:

An earnest enforcement of interior religion, a jealousy of formal ceremonies, an insisting on obedience rather than sacrifice, on mental discipline rather than fasting or hair-shirt, a mortification of the reason, that illumination and freedom of spirit which comes of love; further, a mild and tender rule for the Confessional; frequent confessions, frequent communions, special devotion towards the Blessed Sacrament, these are peculiarities of a particular school in the Church, and St. Ignatius and St. Philip are Masters in it.

St. Philip sought to learn from others and avoided drawing attention to himself. He did not seek praise or wish to start a religious body. Newman writes: “Neglect was the badge which he desired for himself and for his own. ‘To despise the whole world,’ he said, ‘to despise no member of it, to despise oneself, to despise being despised.'” He was mortified when in his old age friends brought strangers to see him, and tried to hide his devotion with words or gestures. Another example of the saint’s humility was that he did not reveal that he had received a special visitation of the Holy Spirit until a few days before dying.

Thus after his death, during his process of canonization, his close spiritual son, Fr. Consolini, keeping to Philip’s wishes, at first refused to speak with praise for St. Philip until he was ordered by superiors to testify about the saint’s life.

St. Philip’s work of reform contrasted with that of Savonarola as day and night. Philip Neri’s work consisted in works of charity and spiritual guidance, helping individual souls, one by one. Newman writes: “He used to go about the squares, shops, warehouses, schools, and shop-counters, “talking with all sorts of persons in a most engaging way about spiritual things, and saying, ‘Well, my brothers, when are we to set about serving God, and doing good?'” and he began to make some great conversions.”

Philip arrived in Rome at a period different from that known by Savonarola. The city had been sacked by the Spaniards and Germans and people thought the predictions of Savonarola had been fulfilled. St. Cajetan preached on the need for conversion and he was followed by the preaching of St. Ignatius. St. Philip then followed in his own quiet manner, like “the whispering of gentle air.”

In addition to caring for the poor he began to go about shopkeepers and ordinary workers while also visiting the sick in the hospitals. A group of about fifteen men joined him in attending convalescent pilgrims who had left the hospitals but were not yet recovered.

Then after fifteen years in Rome he was at last ordained and he began to hear confessions, beginning finally what Newman calls his “real mission” at the age of thirty-five. For three times the number of years he had been in Rome he gave sacramental absolution and advice to those who came to him, earning the title of Apostle of Rome.

Whereas other saints had evangelized in non-Christian lands,

(h)e was kept at home, in the very heart of Christendom, not to evangelize, but to recover; and his instrument of conversion was, not Baptism, but Penance. The Confessional was the seat and seal of his peculiar Apostolate. Hence, as St. Francis Xavier baptized his tens of thousands, Philip was, every day and almost every hour, for forty-five years, restoring, teaching, encouraging, and guiding penitents along the narrow way of salvation.

This was his great life’s work: bringing spiritual health and forgiveness to sinful men and women through the Sacrament of Confession. Later, as with St. John Vianney, he began hearing confessions early in the day and spent many hours in the confessional. He would interrupt anything to hear someone’s confession and even on the day of his death he began hearing confessions. Thus unlike the fiery preacher of Florence, for forty-five years St. Philip drew many souls to heaven with great patience through this Sacrament.

St. Philip sought the interior reform which lead persons to exterior reform. He dealt gently with persons who were extravagant in their clothing and habits. Newman explains:

A rich ecclesiastic came to him in coloured clothes, like a layman: Philip talked with him for a fortnight, without saying a word about his dress. At the end of the time he put it off of his own accord, and made a general confession. His biographer says: He was very much against stiffness and off-hand prohibitions about wearing fine clothes, collars, swords, and such-like things, saying that if only a little devotion gained admittance into their hearts, you might leave them to themselves. If he spoke of them, it was good-naturedly and playfully. You recollect he said to a lady, who asked if it was a sin to wear slippers with very high heels, according to an excessive fashion of the day, “Take care they do not trip you up.”

He had little fondness for the pulpit and did not like sermons with harsh rebukes. Rather, he sought to win men over through gentleness. It was said ‘Father Philip draws souls as the magnet draws iron.’ And in consequence of his love for penitents who came to him even at an old age he underwent severe penances for their sins. Thus, with such tenderness, prudence and charity he gained the love of the Roman population. Gradually the people of Rome came to realize the greatness of the one who lived among them:

At length there was no possibility of mistaking it. Visitors to Rome discerned the presence of one who was greater than Pope and Cardinals, holy, venerable and vigilant as the rulers of the Church then were. “Among all the wonderful things which I saw in Rome,” says one of them, writing when Philip was turned fifty, “I took the chief pleasure in beholding the multitude of devout and spiritual persons who frequented the Oratory. Amid the monuments of antiquity, the superb palaces and courts of so many illustrious lords, it appeared to me that the glory of this exemplar shone forth with surpassing light.

His fame extended to Spain, France and other nations. Men and women of every station in life came to see him to seek his advice and prayer. He was consulted by the poor and wealthy as well as by cardinals and popes. He encouraged Sacred Music and pilgrimages to replace the Carnival and its excesses. He encouraged those who read works of chivalry or hurtful novels to read the lives of saints. He instructed his disciples to write about heresies and on other important issues such as the Notes of the Church.

When he died countless people from all of walks of life prayed for two days before his remains in the church. It was a tribute to his humility, charity and work in the confessional. This was a great reformer, the Apostle of Rome.

Centuries later St. Philip’s example of humble and gentle service leading people to God was a great inspiration to John Henry Newman and other fellow converts. Today we too have much to learn about St. Philip’s work of reform, a work that should be based on humility and charity, and the grace that flows from the Sacraments. Yet, how often instead we think of reform primarily in terms of politics and legal action.