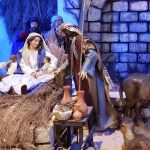 It is right and fitting that soon after the great event of History, Christ’s incarnation, that we should turn our minds to the natural occurrences which this Birth initiated, Christ becoming part of a human family, and Mary, though human, being the Mother of God. These two things, so familiar, motherhood and family, are beautiful points of meditation for us, when we contemplate the reality of these mysteries … God as a child raised by human parents, and God as an infant, nurtured and fed at the breast of a human mother. Blessed John Henry Newman aids us in our meditation:

“When, for our sakes, the Son came on earth and took our flesh, yet He would not live without the sympathy of others. For thirty years He lived with Mary and Joseph and thus formed a shadow of the Heavenly Trinity on earth. O the perfection of that sympathy which existed between the three! Not a look of one, but the other two understood, as expressed, better than if expressed in a thousand words—nay more than understood, accepted, echoed, corroborated. It was like three instruments absolutely in tune which all vibrate when one vibrates, and vibrate either one and the same note, or in perfect harmony.”

How natural it is that these three would have had a “community of shared feeling, of sympathy” among each other. Sympathy is more than feeling for others’ sufferings, it is also a conformity of feelings among persons, derived from the Greek “sym” and “pathos” meaning “feeling together.” And to express this concept Newman uses a comparison with three musical instruments vibrating in perfect harmony.

Newman then reminds us that this unity on earth is an image of the eternal divine unity of the three divine Persons:

“SYMPATHY may be called an eternal law, for it is signified or rather transcendentally and archetypically fulfilled in the ineffable mutual love of the Divine Trinity. God, though infinitely One, has ever been Three. . . . The devil only is barren and lonely, shut up in himself—and his servants also.”

Each family on earth should reflect in some way the unity of the Father, Son and Holy Spirit. To be part of a human family is the opposite of being alone. It is to be a part of a whole. Due to pride and selfishness, however, so many families are divided. The Holy Family teaches us the humility and love that should permeate every home.

In this short text Newman does not elaborate on the role of each member of the family but the mention of St. Joseph calls to mind the manliness, chastity, and complete self-giving of Jesus’ father on earth. Mention of his death serves to remind us of the sympathy and harmony between Jesus, the Virgin Mary and St. Joseph. Newman writes thus:

“The first weakening of that unison was when Joseph died. It was no jar in the sound, for to the last moment of his life, he was one with them, and the sympathy between the three only became more intense, and more sweet, while it was brought into new circumstances and had a wider range in the months of his declining, his sickness, and death. . . . . Not that Joseph, though so saintly, added much in volume of sound to the other two, but sympathy, by its very meaning, implies number, and, on his death, one, out of three harps, was unstrung and silent.”

The death of St. Joseph shows us that to be part of a human family on earth brings both joy and trials, for we rejoice and suffer together. In this, too, Christ has participated. Newman captures this combination of feelings beautifully:

“O my soul, thou art allowed to contemplate this union of the three, and to share thyself its sympathy, by faith though not by sight. . . . . Let the breathings of my soul be with Jesus, Mary, and Joseph. Let me live in obscurity, out of the world and the world’s thought, with them. Let me look to them in sorrow and in joy, and live and die in their sweet sympathy.”

Perhaps our own human families are more occasions of suffering, than of joy; nevertheless, Newman teaches us that we too may take part in the Holy Family’s sympathy, of their shared feelings, of their love. What an eternal joy! To so strive to conform ourselves to this family, that we become more holy, for Mary is our Mother too. Considering that this is in large measure the fruit of the the Holy Sacrifice of the Mass, Newman prays to Mary:

“O Holy Mother, stand by me now at Mass time, when Christ comes to me, as thou didst minister to Thy infant Lord—as Thou didst hang upon His words when He grew up, as Thou wast found under His cross. Stand by me, Holy Mother, that I may gain somewhat of thy purity, thy innocence, thy faith, and He may be the one object of my love and my adoration, as He was of thine.”

In this Octave of the Nativity of Christ which includes the feast of the Holy Family, and closes with the solemnity of Mary, the Mother of God, let us try to conform our hearts and minds to Jesus, Mary and Joseph so that we may become worthy members of this Holy Family, and that we may be pleasing to Mary, our Mother, the Mother of God. Let us think of some specific trait that we need to acquire or increase to live in sympathy with Jesus, Mary and Joseph.