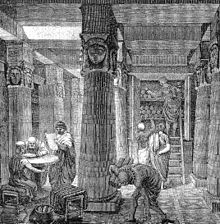 The immense library attracted teachers and students to the Alexandrian University. The library and the faculty of this institution was endowed by the government, a rare thing for any university until the 20th century.

This University or College called the Museum was located in a suburb of Alexandria, which Newman describes: “It was pleasantly situated on the water’s edge, and had been set aside for ornamental buildings, and was traversed by groves of trees. Here stood the royal palace, here the theatre and amphitheatre; here the gymnasia and stadium; here the famous Serapeum. And here it was, close upon the Port, that Ptolemy placed his Library and College. As might be supposed, the building was worthy of its purpose; a noble portico stretched along its front, for exercise or conversation, and opened upon the public rooms devoted to disputations and lectures.”

Teachers and students came from every part of the world; some were chosen by concursus or competition. With time new colleges were added to the original Museum. One, which was the foundation of the Emperor Claudius, bore his name. Youth attended lectures in Grammar, Rhetoric, Poetry, Philosophy, Astronomy, Music, Medicine and other arts and sciences. Some of the great Christian writers and doctors, Clement, Origen, Anatolius, Athanasius and St. Gregory of Nyssa lived in Alexandria.

There Potamo, Ammonius, Plotinus, and Hierocles gave rise to a new philosophy: neo-Platonism. Among its poets was Appollonius of Rhodes, known for his poem on the Argonauts. Egyptian, Carthaginian and Etruscan Antiquities was the subject of research.

The Alexandrian schools, however, had greater fame for its medicine and mathematics. Galen who came from Pergamus was one of its celebrated physicians. Three of the great ancient mathematicians also taught in Alexandria. Apollonius of Perga, Diophantus, a native Alexandrian, and Euclid, whose country is unknown. Apollonious wrote on Conic Sections and Diophantus on Algebra. There were other illustrious men such as Eratosthenes of Cyrene, and Ptolemy, said to be of Pelusium, for whom the Ptolemaic system is named.

In the third and fourth centuries the celebrated Studium or University of Alexandria suffered from wars, but the schools and library continued. But even as late as the twelfth century, the Jew, Benjamin of Tudela wrote about the twenty colleges to which students from all parts of the world traveled to learn philosophy.

Newman will go on to compare this great institution for the advancement of science to the Roman schools which have a more direct bearing on the Medieval Universities.