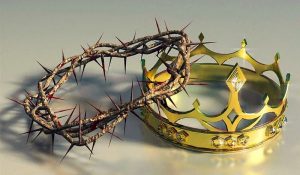 Now more than ever are men and women suspicious of authority, and for good reason.  In this short century alone, the evil perpetrated by some in authority – in government, entertainment, business, and even the Church – has left many angry, afraid, and distrustful.  As a result, even our language of “king,” “ruler,” “judge,” and “authority” have been tainted by so many sordid examples. Cardinal John Henry Newman’s The Dream of Gerontius enters into this conversation by reformulating our understanding of these concepts, so that by heavenly truths we may gain earthly wisdom.

This Sunday we enter the holy season of Advent, when we prepare our hearts to receive our Lord at Christmas.  “Come worship now the infant king,” that famous Christmas carol, reminds us. He is Lord and He is king, but what sort of king is He?  He is unlike any king we have ever known. He is humility itself, for what else could describe the God of the universe who takes on the very nature of His creatures, Who is born in a manger, lives as a common worker, and voluntarily dies the death of a criminal?  This king redefines greatness which, as the German poet and philosopher Holderlin says so beautifully, “Not to be encompassed by the greatest, but to let oneself be encompassed by the smallest – that is divine.”

In Newman’s poem, The Dream of Gerontius, the Angel reveals the dignity and humility of our king: 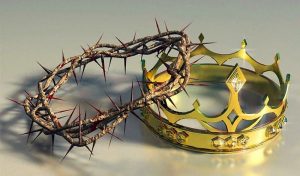 Here we see that our king’s glory is not in self-promotion or outward signs of power, but rather in sanctity and outward signs of sacrifice.  While the kings, CEOs, and leaders of this world have been known for their remoteness, God is near; they demand service, but He offers Himself; they worship themselves, but He wears a crown of thorns; they build thrones, but He bears the cross, with all its pain and shame.

He is also our judge, and this concept He also turns upside down.  The judges of this world are subject to human weakness and failure to judge justly.  We need not fear being wrongfully accused or harshly sentenced, for Christ is the embodiment of truth and justice.  The angel in Newman’s poem describes our judgment:

“When then—if such thy lot—thou seest thy Judge,
The sight of Him will kindle in thy heart
All tender, gracious, reverential thoughts.
Thou wilt be sick with love, and yearn for Him,
And feel as though thou couldst but pity Him,
That one so sweet should e’er have placed Himself
At disadvantage such, as to be used
So vilely by a being so vile as thee.
There is a pleading in His pensive eyes
Will pierce thee to the quick, and trouble thee.”

This judge we will desire, for our eyes will be opened and we will see the reality of who we are and who He is, and it will not be fear of an unjust judge, but sorrow for hurting our beloved, that will fill our hearts.

This season of Advent is an invitation to consider our coming judgment and to examine our souls.  The Church calls us to a period of penance and works of charity, which are often the best forms of penance.  But as we consider our judgment, we should ask ourselves: What type of king and judge is the One whom we call Lord and God?

If we allow Him, He will come so near to us that our hearts will not be able to contain so humble and loving a Lord.