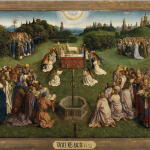 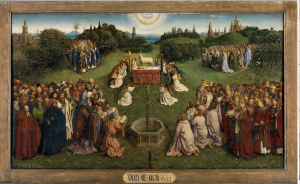 John Henry Newman’s longest poem is a spiritual work rich in theology. Composed at a time in which he had a presentiment of impending death, the reality of last things was very present to the author.

The poem, written in 1865 when Newman had been Roman Catholic for twenty years, conveys the religious truths he had come to fully embrace, but which for Anglicans presented difficulties, such as prayer for the dead and belief in a purgatory.[1]

In ten preceding segments we have read and briefly commented on most of the poem. It begins with the death of Gerontius. A priest goes to the bed of the dying Gerontius, along with fellow Christians, to pray for their brother. From the start Newman will depict the important Catholic belief of the Communion of Saints, which includes Christians on earth, the angels and saints in heaven, and the souls in Purgatory. The Virgin Mary is invoked a few times, and Newman’s devotion to the guardian angels is clearly displayed.

Gerontius’ guardian angel is a protagonist accompanying him throughout his journey. The angel calls him “his charge,” and at his death exclaims: “my work is done/ my task is o’er” because the crown of victory is won. He leads Gerontius’ soul before Christ’s throne for judgment.

Newman’s description of the soul’s final judgment is perhaps the most novel part of the poem. A central part deals with the anticipation of the soul’s personal appearance before Christ and later that actual judgment. Newman probably drew here from his reading of a book by St. Catherine of Genoa on the nature of Purgatory, although the poem in fact deals more with the judgment than with Purgatory. The judgment consists of a keen awareness before our Savior of the many offenses we have committed against him who died for our sins, and who was so brutally treated.

“There is a pleading in His pensive eyes

Will pierce thee to the quick, and trouble thee.

And thou will hate and loath thyself; for, though

Now sinless, thou wilt feel that thou hast sinn’d

As never thou didst feel; and wilt desire

To slink away, and hide thee from his sight:

And yet will have longing aye to dwell

Within the beauty of his countenance.

And these two pains, so counter and so keen, –

The longing for Him, when thou seest Him not;

The shame of self at thought of seeing Him, –

Will be thy veriest, sharpest purgatory.”
For Newman, thus, purification begins with judgment and it continues to Purgatory. The soul is hailed: “Oh happy suffering soul! For it is safe.” The soul, embracing its deserved punishment, pleads to its angel: “Take me away;” it wishes to be purified in Purgatory. The poem ends with the soul entering Purgatory sustained by the prayers of the blessed souls in Purgatory.

Throughout the verses there is no inkling of any doubt or uneasiness about the religious truths on the part of the author. His beliefs are expressed with great simplicity and confidence. The verses do not elicit sadness; rather, they manifest the greatness and justice of God, the immense love of Jesus Christ who died for men’s sins, and his infinite and merciful love. In various stanzas choirs of angels extol God’s love, his saving work: “Praise to the Holiest in the height,/And in the depth be praise: In all His words most wonderful; Most sure in all His ways!”

In the encyclical Spe Salve Pope Benedict writes about the nature of judgment in similar terms:

“Some recent theologians are of the opinion that the fire which both burns and saves is Christ himself, the Judge and Saviour. The encounter with him is the decisive act of judgement. Before his gaze all falsehood melts away. This encounter with him, as it burns us, transforms and frees us, allowing us to become truly ourselves.”

In these beautiful verses judgment and Purgatory are thus revealed in their true light as a merciful design of God who purifies the soul for its final union with him. They are a meditation that invites the reader to praise God and prepare for his own judgment with firm hope in God’s mercy.