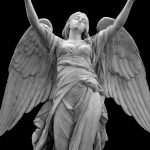 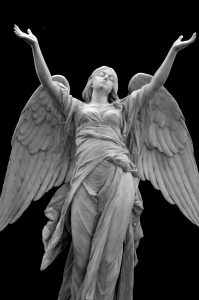 Newman reflects more on the dying Gerontius. His soul has entered another life. It is severed from his body:

“I went to sleep; and now I am refresh’d,

A strange refreshment: for I feel in me

An inexpressive lightness, and a sense

Of freedom, as I were at length myself,

And ne’er had been before. How still it is!

I hear no more the busy beat of time,

No, nor my fluttering breath, nor struggling pulse;

Nor does one moment differ from the next.”

Gerontius sees his death as if in a dream. The soul is aware of what has happened to it, and to its friends surrounding it:

“I had a dream; yes:—some one softly said

“He’s gone;” and then a sigh went round the

And then I surely heard a priestly voice

Cry “Subvenite;” and they knelt in prayer.

I seem to hear him still; but thin and low,

And fainter and more faint the accents come,

As at an ever-widening interval.

Ah ! whence is this? What is this severance?”

The soul continues its musings:

But in the body still; for I possess

A sort of confidence which clings to me,

That each particular organ holds its place

As heretofore, combining with the rest

Into one symmetry, that wraps me round,

And makes me man; and surely I could move,

Did I but will it, every part of me.

And yet I cannot to my sense bring home

By very trial, that I have the power.”

The soul of Gerontius is in a world where time and space is not what we know. The soul says:

“So much I know, not knowing how I know,

That the vast universe, where I have dwelt,

Is quitting me, or I am quitting it.

Or I or it is rushing on the wings

Of light or lightning on an onward course,

And we e’en now are million miles apart.

Yet … is this peremptory severance

Wrought out in lengthening measurements of space

Which grow and multiply by speed and time?

Or am I traversing infinity

By endless subdivision, hurrying back

From finite towards infinitesimal,

Thus dying out of the expansive world?”

At this point the dream of Gerontius begins to unveil the mysterious world of the angels: the Guardian Angels, the Seraphim and the Cherubim, as well as the fallen angels. The soul is aware of its guardian angel taking it to Christ:

“Another marvel: some one has me fast

Within his ample palm; ’tis not a grasp

Such as they use on earth, but all around

Over the surface of my subtle being,

As though I were a sphere, and capable

To be accosted thus, a uniform

And gentle pressure tells me I am not

Self-moving, but borne forward on my way.

And hark! I hear a singing; yet in sooth

I cannot of that music rightly say

Whether I hear, or touch, or taste the tones.

Oh, what a heart-subduing melody!”

Then the Guardian Angel exclaims:

“My work is done,

And so I come,

For the crown is won,

In charge to me

This child of earth

E’en from its birth,

To serve and save,

And saved is he.

This child of clay

To me was given,

To rear and train

By sorrow and pain

In the narrow way,

From earth to heaven.”

This is a picture of the marvelous world hereafter and of the help of our guardian angels. When was the last time you spoke to your Guardian Angel? Befriend him and he will guide you and protect you.