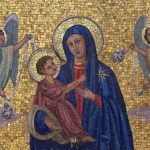 Every Sunday at Mass, we bow our heads as we say, “By the power of the Holy Spirit He was born of the Virgin Mary and became man.” In doing so, we honor what St. John Henry Newman calls “The chief mystery of our holy faith”—the incarnation. How easy it is to forget this shocking and powerful truth despite this weekly reminder. Unlike the adults who can’t hear the sound of the bell in the classic children’s tale, “The Polar Express,” we must be like little children if we want to take hold of this mystery. 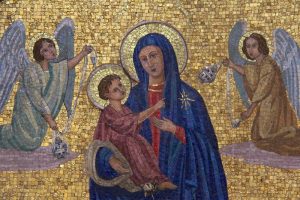 “Taking hold” of a mystery is something more like grabbing the handrail on the outside of a moving train and letting it whisk you off. As we think of God becoming man, we encounter a world unexplored, with lots of questions. “Take, for instance, His temptation. Why was it undergone at all, seeing our redemption is ascribed to His death, not to [His temptation]? Why was it so long? What took place during it? What was Satan’s particular object in tempting Him?” Newman asks. One knows he is in the presence of a mystery when there are more questions than answers. But a mystery, in Catholic doctrine, is not about complete ignorance. We do know some very definite truths, we just don’t understand them as fully as we wish.

In his sermon, “The Humiliation of the Eternal Son,” Newman points to a few of the revealed truths of this sacred teaching:

Scholars have written whole tomes on each of these points, but Newman is primarily concerned with our understanding one thing: Christ is both God and man at the same time. Don’t try to reconcile this apparent contradiction, as if Christ was man some of the time and God at other times, or as if He looked like a man on the outside, but was God hidden on the inside. No, these are heresies, and as such they come from a weakness in our nature to grasp mystery rather than to be grasped by it.

Newman explains this awesome truth: “Thus He possessed at once a double assemblage of attributes, divine and human. Still he was all-powerful, though in the form of a servant; still He was all-knowing, though seemingly ignorant; still incapable of temptation, though exposed to it; and if any one stumble at this, as not a mere mystery, but in the very form of language a contradiction of terms, I would have him reflect on those peculiarities of human nature itself.” For example, Newman says, think about a baby, which for the first few months doesn’t seem to have a soul, but “only the senses and functions of animal life, yet has, we know, a soul, which may even be regenerated.” The incarnation is certainly a mystery, but our nature is a mystery too.

Don’t fall into the trap, Newman warns us, of “distinguish[ing] between the Christ who lived on earth and the Son of God Most High, speaking of His human nature and His Divine nature so separately as not to feel or understand that God is man and man is God.”

What do we do with a mystery? What is its use? Already we are on the wrong track if we are thinking only of its practical function. A mystery is meant to be contemplated, pondered, and embraced. We should allow it to envelop us in itself. In doing these things, or in letting them be done to us, we fall deeper in love and understanding of our Lord.

On Sunday at Mass, when we bow our heads at the mention of the Incarnation, and before receiving Holy Communion, let’s remember who it is we worship. And let’s ask our Lord to open the eyes of our hearts to contemplate Him whom we cannot fathom, but whom we can call our Lord, Father and intimate friend.