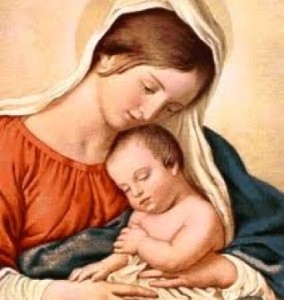 Today is Christmas day. In his Parochial and Plain Sermons Blessed John Henry Newman preached a sermon on the Incarnation reflecting on St. John’s text: “The Word was made flesh, and dwelt among us.” John 1: 14.

Newman begins speaking of the awe that the early generation of Christians had before the mystery of the Incarnation. For these Christians a few words of the New Testament sufficed to teach about Christ’s incarnation.

Newman explains that the Creeds formulated in the fourth century are an additional help for Christians. “The declarations made in them, the distinctions, cautions, and the like, supported and illuminated by Scripture, draw down, as it were, from heaven, the image of Him who is on God’s right hand, preserve us from an indolent use of words without apprehending them, and rouse in us those mingled feelings of fear and confidence, affection and devotion towards Him, which are implied in the belief of a personal advent of God in our nature, and which were originally derived to the Church from the very sight of Him.”

Newman sums up the doctrine of the Incarnation in a few paragraphs. The Eternal Father in his great love for his original creation sent his Son to repair which sin had caused: “And with a wonderful condescension He came, not as before in power, but in weakness, in the form of a servant, in the likeness of that fallen creature whom He purposed to restore. So He humbled Himself; suffering all the infirmities of our nature in the likeness of sinful flesh, all but a sinner,—pure from all sin, yet subjected to all temptation,—and at length becoming obedient unto death, even the death of the cross.”

Christ took up our human nature except for sin. But since after Adam’s sin nature was corrupt He did not come in the way of nature. He prepared for himself a pure tabernacle: “He came by a new and living way; not, indeed, formed out of the ground, as Adam was at the first, lest He should miss the participation of our nature, but selecting and purifying unto Himself a tabernacle out of that which existed. As in the beginning, woman was formed out of man by Almighty power, so now, by a like mystery, but a reverse order, the new Adam was fashioned from the woman. He was, as had been foretold, the immaculate “seed of the woman,” deriving His manhood from the substance of the Virgin Mary; as it is expressed in the articles of the Creed, “conceived by the Holy Ghost, born of the Virgin Mary.”

Newman calls Mary by the words of Scripture “an enclosed garden, a spring shut up, a fountain sealed” chosen by God for the new creation of God. In the Incarnation the divine takes the human and makes it divine.

“He, the Son of Mary, and she (if it may be said), the mother of God. Thus He came, selecting and setting apart for Himself the elements of body and soul; then, uniting them, to Himself from their first origin of existence, pervading them, hallowing them by His own Divinity, spiritualizing them, and filling them with light and purity, the while they continued to be human, and for a time mortal and exposed to infirmity.”

The Eternal Essence was one with the body and rational soul of the man so that Christ was truly God and Man, One Person, “as we are soul and body, yet one man, so truly God and man are not two, but One Christ.” And through this Sacred Humanity Jesus lived among men, chose his Apostles, ministered to men, suffered the Passion and Death, and rose from the dead. This is the mystery of the Incarnation spoken of in the text “The Word was made flesh, and dwelt among us.”

This presence of God differed from earlier manifestations of God’s presence to his people: speaking through the Prophets, manifesting his presence in the Temple, the Holy Spirit acting in St. John the Baptist and in the Apostles after Pentecost. Another mode in which man is united to God is through man’s participation in divine nature (see 2 Pet 1:4). God is one with the believer by his real presence in the soul and by the fruits of the Holy Spirit. As wonderful as this gift is the Incarnation is of a different kind. The Son does not participate in the holiness and perfection of God; He is “Life and Holiness itself, such as the Father is,—the Co-eternal Son incarnate, God clothed with our nature, the Word made flesh.”

There are other “visitations” of the Eternal Son in the history of the Patriarchs: the appearance of God to the Patriarchs through angels. Newman comments: “We are not informed, nor may we venture to determine; still, any how, the Angel was but the temporary outward form which the Eternal Word assumed, whether it was of a material nature, or a vision.”

Heretics have taken these various manifestations of God at various times to undermine or refute the doctrine of the Incarnation. Newman explains: “Rejecting the teaching of the Church, and dealing rudely with the Word of God, they have ventured to deny that “Jesus Christ is come in the flesh,” pretending He merely showed Himself as a vision or phantom;—or they have said that the Word of God merely dwelt in the man Christ Jesus, as the Shechinah in the Temple, having no real union with the Son of Mary (as if there were two distinct Beings, the Word and Jesus, even as the blessed Spirit is distinct from a man’s soul);—or that Christ was called God for His great spiritual perfections, and that He gradually attained them by long practice.”

Because of these errors the Church was obliged to draft Creeds such as the Athanasian Creed. Newman holds that this Creed leads men to praise of God even while it speaks imperfectly looking as through a dark glass. “Let us then, according to the light given us, praise and bless Him in the Church below, whom Angels in heaven see and adore. Let us bless Him for His surpassing loving-kindness in taking upon Him our infirmities to redeem us, when He dwelt in the inner-most love of the Everlasting Father, in the glory which {39} He had with Him before the world was. ”

Newman closes this beautiful sermon describing the humility of Christ’s birth and his priestly work on behalf of men.

“By birth the Only-begotten and Express image of God; and in taking our flesh, not sullied thereby, but raising human nature with Him, as He rose from the lowly manger to the right hand of power,—raising human nature, for Man has redeemed us, Man is set above all creatures, as one with the Creator, Man shall judge man at the last day (…) He who has given us to share His own spiritual nature, He from whom we have drawn the life’s blood of our souls, He our brother will decide about His brethren.”