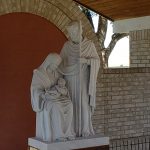 Christmas Day has come and gone, but for Catholics Christmas Day is only the beginning of the most joyful of seasons. St. John Henry Newman wrote a number of sermons on the Incarnation of the Son of God. These sermons  indicate the importance he saw in this unique Christian doctrine. In this Octave of Christmas, as  we continue to celebrate, it is very fitting to also continue to reflect on this central mystery of the faith.

Since the third and fourth centuries, the Church formulated and has taught the doctrine of the Trinity. Newman saw in his time the grave error of the Unitarian denial of the Triune God and thus often refers to the doctrine of the Trinity in his sermons. The age in which Newman lived, much like our current age, placed reason before faith. His rational age wished to deny the mystery; therefore, Newman felt the need to teach it and to speak in terms of the mystery, not reducing it to the rational.

Before the time of Newman, throughout the centuries Christians have looked at the Incarnation in various ways. A recurring explanation is to see the Incarnation as the means chosen by God for the expiation of men’s sins, and this is what we profess in the Creed, that “he died for our sins.” But the evangelical Christians of Newman’s time tended to reduce Christian doctrine to this truth: Christ’s expiatory or atoning death.

An earlier and more holistic belief, taught by the Greek Church Fathers such as St. Athanasius, presents the Incarnation as the way of man’s deification through a new birth in Christ. This was the teaching of St. John and St. Paul as well as that of St. Peter.

Both doctrines are true, but in the West the latter is not commonly taught or understood. Newman, however, had carefully read the New Testament, and had translated Athanasius’ treatise on the Incarnation of God. He was thus immersed in this beautiful doctrine. Newman writes:

“Again, the Gospel teaches us another mode in which man may be said to be united with Almighty God. It is the peculiar blessedness of the Christian, as St. Peter tells us, to be “partaker of the Divine Nature.” [2 Pet. i. 4.] We believe, and have joy in believing, that the grace of Christ renews our carnal souls, repairing the effects of Adam’s fall. Where Adam brought in impurity and unbelief, the power of God infuses faith and holiness. Thus we have God’s perfections communicated to us anew, and, as being under immediate heavenly influences, are said to be one with God. And further, we are assured of some real though mystical fellowship with the Father, Son, and Holy Spirit, in order to this: so that both by a real presence in the soul, and by the fruits of grace, God is one with every believer, as in a consecrated Temple.” (PPS II)

For Newman, the mystery of the Incarnation has inexhaustible rich theological and spiritual content. Fr. Keith Beaumont deals with this in his book on Newman, Dieu intériur: la théologie spirituelle de John Henry Newman. One of the truths that Newman drew from this mystery is that in the Holy Eucharist is a continual revelation of the Incarnation. In his Development of Christian Doctrine, he explains that the Incarnation establishes at the heart of Christianity a sacramental principle. By this he means that the visible refers us to the invisible and the invisible manifests itself to us in the visible.

In another sermon he writes: “No one realizes the Mystery of the Incarnation but must feel disposed towards that of Holy Communion.” He closes the sermon with an invitation: “Let us pray Him then to give us such a real and living insight into the blessed doctrine of the Incarnation of the Son of God, of His birth of a Virgin, His atoning death, and resurrection, that we may desire that the Holy Communion may be the effectual type of that gracious Economy.” (PPS V)

And let us, too, remember this when we approach the Eucharistic banquet at Mass … the altar is the manger, the Sacred Host the child Jesus, and we, like the shepherds and Magi, fall on our knees before the King of Kings, who came to us as a vulnerable infant and is present as the Sacred Host. Oh Come Let us Adore Him!