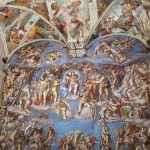 What happens after death to the souls of those who die in friendship with God? This question might be answered differently by our separated brethren, those Christians who are not Catholic. As an Anglican, John Henry Newman thought the answer was that souls were in what is called an intermediate state, a state between death and heaven.

In a sermon titled “The Intermediate State,” Newman reflected on the following passage from the Book of Revelation:

“And white robes were given unto every one of them; and it was said unto them, that they should rest yet for a little season, until their fellow-servants also, and their brethren that should be killed as they were, should be fulfilled.” Rev. vi. 11.

Analyzing this text he concluded that these souls are at rest from their labors, and happy. They are robed in white.

He noted that many other Christians think of this state instead as a prison called Purgatory. “A great part of the Christian world, as is well known, believes that after this life the souls of Christians ordinarily go into a prison called Purgatory, where they are kept in fire or other torment, till, their sins being burned away, they are at length fitted for that glorious kingdom into which nothing defiled can enter.” He comments that it would be “ … a very sad and depressing prospect … (n)ot that we should have any reason to complain: for our sins deserve an eternal punishment, were God severe.” And further “I do not say that to many a sinner, it would not be an infinitely less evil to suffer for a time in Purgatory, than to be cast into hell for ever.”

Still, as an Anglican, Newman believed the Bible assured us that our friends are better provided for than such a “depressing prospect.” He compared this to “ … a parent (who) would hush a child’s restlessness, cherishing it in her arms, and lulling it to sleep, or diverting it from the pain or the fright which agitates it, so the season of delay, before Christ comes in judgment, tedious in itself, and solitary, is compensated to the spirits of the just by a present gift in earnest of the future joy. “

Next, based on the same text from Revelation, Newman opined  that since “their works do not follow them,” these souls in the intermediate state have not yet received their reward.  “They are in an incomplete state in every way, and will be so till the Day of Judgment, which will introduce them to the joy of their Lord.”

They are incomplete, inasmuch as their bodies are in the dust of the earth, and they wait for the Resurrection.” They are in a state of rest “under the altar,” not in the full presence of God. And at the same time in a way unknown to us still on earth,  disembodied souls cry out for justice against those who killed them.

Thus, as an Anglican, he believed that the intermediate state was a time of preparation from death to heaven. It is the time of the disembodied state that points to the resurrection of the body and heaven.

“This, then, on the whole, we may humbly believe to be the condition of the Saints before the Resurrection, a state of repose, rest, security; but again a state more like paradise than heaven—that is, a state which comes short of the glory which shall be revealed in us after the Resurrection, a state of waiting, meditation, hope, in which what has been sown on earth may be matured and completed.”

But after first writing this sermon, Newman grew in the practice of praying for the deceased in the hope of obtaining the remission of their sins through prayers and sacrifices. He thus in his actions accepted the Catholic teaching of Purgatory as a necessary purification rather than as a state of rest.

In one of his poems composed as a hymn for the oratory after he became Catholic, he called Purgatory a “Golden Prison.” This shows how Newman’s understanding had grown and changed.  And in his important poem, The Dream of Gerontius, which he composed also as a Catholic St. John Henry described a soul coming to the throne and judgment seat of Christ, and upon reaching it, begging his guardian angel to take him away to Purgatory since he is keenly aware of his need for purification. Newman, now the latest saint of the Catholic Church, had come to understand the fullness of Christian teaching.

In the catechism the Church teaches us that “All who die in God’s grace and friendship, but still imperfectly purified, are indeed assured of their eternal salvation; but after death they undergo purification, so as to achieve the holiness necessary to enter the joy of heaven” (n. 1030). The Church also invites us to pray and offer sacrifices, also known as suffrages, for all those who have died in God’s grace.

Do I understand this teaching on Purgatory and practice of suffrages? What specifically can I do to help the souls in Purgatory? Do I offer the many indulgences available to me while on earth for those souls who can no longer merit them? It is one of the most generous things we can do for the faithful departed. Let us be aware of those souls in the Golden Prison, especially those who have no one to pray for them.

St. John Henry Newman, pray for them and pray for us!