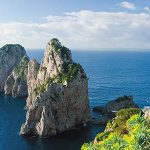 Life can be compared to a long journey by ship across difficult waters amid many challenges. We often hear voices from the shore calling us in one direction or another. Blessed John Henry Newman alerts us to these voices in this short and evocative poem, “The Isles of the Sirens.”

In the poem, Blessed Newman warns against things, or voices, of the world that have the capability of seducing men from that which they should be considering: God and eternity. It is often noted how much the modern world offers in the form of distraction, from smartphones, to live streaming TV, to the 24-hour news cycle. But every age has distractions, and this is what Newman labels the “Siren choirs.”

In the Greek epics which Newman knew so well, including the Odyssey,  e learn of the Sirens, those mythical singing creatures whose irresistible song lured sailors to their deaths, crashing into the shore, trying to reach them. Instead of the “siren choirs,” Newman teaches, we should listen for heavenly music, which will purify, not destroy us.

Note the accented syllable that Newman uses to begin lines 1, 3, and 5. The initial accent emphasizes these first words, in the otherwise iambic lines. An unaccented first syllable of the iamb would be expected; the trochaic substitution shows Newman’s ability to vary meter to fit his message. In line 9, the bold spondee, two accented syllables in a row, is like a fist pounding on a desk. We take notice!

The Isles of the Sirens

The craft of Siren choirs;

Hush the seductive voice, that floats

Upon the languid wires.

Music’s ethereal fire was given

Not to dissolve our clay,

But draw Promethean beams from Heaven,

And purge the dross away.

Weak self! with thee the mischief lies,

Those throbs a tale disclose;

Nor age nor trial has made wise

In the second stanza, Newman uses another classical reference – that of Prometheus, the Titan who stole fire from the gods for humans, whom he loved. Like the fire of Prometheus, the heavenly music will help mankind to purge baser inclinations away. Newman chides weak humanity, urging us to remember these tales and to learn from antiquity, to choose rightly, not to give in to whatever siren song might be the current distraction.

This is a recurring theme for Newman, that of the Invisible world which will aid us in our path to heaven if we will only listen; these voices keep us from crashing into the rocks to reach the siren song. Let us plug our ears with wax, as did Odysseus’ sailors of old, so that we may safely sail past the sirens, and, instead, let us use the light from an ethereal flame to illumine our path to God.

We are indeed weak and foolish, but if we seek wisdom and listen to the voice of the Holy Spirit, we will hear His voice from Heaven inspiring us to live as God’s children here on earth as we journey to that Heavenly shore.