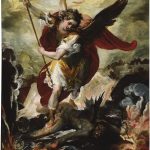 The author of the Book of Hebrews tells us that the Word of God is sharper than a two-edged sword, cutting through and discerning the heart of man. Whether you are introverted or extroverted, liberal or conservative, optimistic or apathetic, educated or ignorant, strong or weak, Scripture has something to say to you. It has a word of correction and a word of encouragement because its words are truth and life. In “The Powers of Nature,” St. John Henry Newman demonstrates that Scripture also discerns whole cultures and ages, and that ours could use both more truth and more life.

What sin is peculiar to our culture? In one word, materialism. Immediately many of us think of shopping sprees and slot machines, and certainly they can be part of it. But materialism is, at heart, an improper love of earthly things. It’s the man or woman who is so taken up with the things of this world that he or she has forgotten the things of the spirit. Here, too, let’s not use that definition to exclude ourselves, as if materialism was only a philosophy or political party one chooses. One can be a de facto materialist by giving excessive importance to physical comfort, job or family situation, living conditions, possessions, etc. It’s quite an easy sin to fall into. 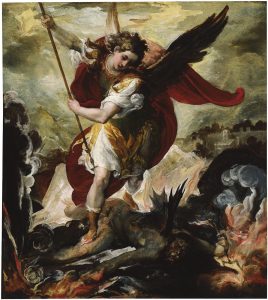 This is exactly where Scripture comes in to remind us of the unseen world all around us. In the “The Powers of Nature,” a sermon Newman delivered on the Feast of St. Michael the Archangel and All Angels, he points out that this world is not somewhere else, but is literally entwined in our own yet veiled from us. For example, throughout the Bible angels are the force behind nature. What we see as wind or fire are actually the work of angels: “It was an Angel which gave to the pool at Bethesda its medicinal quality; and there is no reason why we should doubt that other health-springs in this and other countries are made such by a like unseen ministry. The fires on Mount Sinai, the thunders and lightnings, were the work of Angels; and in the Apocalypse we read of the Angels restraining the four winds. Works of vengeance are likewise attributed to them. The fiery lava of the volcanoes, which (as it appears) was the cause of Sodom and Gomorrah’s ruin, was caused by the two Angels who rescued Lot.”

That angels are behind nature does not mean we cease to study physical science, or that the two are incompatible. In fact, it’s the opposite: the natural and the supernatural are inherently compatible. “Now all these theories of science, which I speak of, are useful, as classifying, and so assisting us to recollect the works and ways of God and of His ministering Angels. And again, they are ever most useful, in enabling us to apply the course of His providence, and the ordinances of His will, to the benefit of man. Thus we are enabled to enjoy God’s gifts; and let us thank Him for the knowledge which enables us to do so, and honour those who are His instruments in communicating it.”

It’s easy enough to say one can be firmly rooted in both the earthly and the heavenly, but how do we do it? Newman says we must be humble and not “imagine that, because [a person] knows something of this world’s wonderful order, he therefore knows how things really go on.” In a way, that means recovering the wonder of children who delight in the world around them, so that “when examining a flower, or a herb, or a pebble, or a ray of light, which he treats as something so beneath him in the scale of existence, suddenly discovered that he was in the presence of some powerful being who was hidden behind the visible things he was inspecting.”

The angels can help us do this. Not only are they a reminder of the invisible world and a consolation to us as we go about our days, they teach us how to have the kind of humility God calls us to: “The very lowest of His Angels is indefinitely above us in this our present state; how high then must be the Lord of Angels! The very Seraphim hide their faces before His glory, while they praise Him; how shamefaced then should sinners be, when they come into His presence!”

Despite these wonderful truths, if our meditation on angels remains theoretical, we have missed the point, Newman says. God Himself has put us in our angel’s care for a reason—so that we might safely return to Him. Throughout our day we can have recourse to our guardian angel, who will never fail to help us.

We couldn’t do any better than to look to the saints as examples. St. Therese of the Child Jesus wrote the following prayer to her angel:

O glorious guardian of my frame!

As some most pure and holy flame,

Before the Lord of endless light.

Yet for my sake thou com’st to earth,

To be my brother, Angel dear:

My friend and keeper from my birth,

By day and night to me most near.

Another saint, Josemaría Escrivá also encouraged people to befriend their guardian angels and seek their help. He wrote: “Whenever you are in need of anything, or are facing difficulties, whether great or small, invoke your Guardian Angel, asking him to sort the matter out with Jesus, or to do the particular service you may require.”

Let’s resolve today to converse with our angel and to learn how to keep our eyes fixed on heaven even as we live on earth.