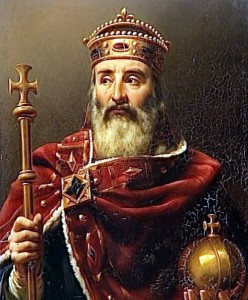 Newman continues to paint a picture of the history of universities and turns to the development of the medieval university, the fruit of Catholic scholars and a Christian culture. At the time the Danes invaded Ireland and England the missionaries of those countries took their learning to France where Charlemagne undertook a great work of promoting education and culture.

During the late Roman Empire the Church taught the clergy but the laity were educated for the most part in state schools. When the Roman Empire collapsed the Church began to educate both clergy and laity. Newman writes: “Henceforth, as all government, so all education, was to be founded on Revealed Truth. Secular teaching was to be united to sacred; and the Church had the supervision both of lay students and of profane learning.”

Alcuin, was an Englishman that took sacred and profane learning to the Frankish Empire setting up schools for clergy and laity. Newman traces Alcuin’s education to Rome.

“His history takes us back to that earlier age, when Theodore of Tarsus, Primate of England, brought with him thither from Rome the classics, and made Greek and Latin as familiar to the Anglo-Saxons as their native tongue. Alcuin was the scholar of Bede and Egbert; Egbert was educated in the York school of Theodore, and Bede in that of Benedict Biscop and of John precentor of the Vatican Basilica.”

According to Newman, Charlemagne laid down the principles for universities as we know them: institutions open to all classes of students and teaching all subjects. He first paid attention to the restoration of Episcopal Seminaries places of training for future clergy which had suffered from the Barbarian invasions. Newman notes that these institutions would last for four centuries when they were absorbed by universities, until the Council of Trent once again made them independent.

“To these Seminaries he added, what I have spoken of as his characteristic institution, grammar and public schools, as preparatory both to the Seminaries and to secular professions. Not that they were confined to grammar, for they recognized the trivium and quadrivium; but grammar, in the sense of literature, seems to have been the principle subject of their teaching. These schools were established in connexion with the Cathedral or the Cloister; and they received ecclesiastics and the sons of the nobility, though not to the exclusion of the poorer class.”

Charlemagne opened the way for what would one day be the Studium Generale, the University of Paris. In an early history of this University, Egaffius Bulaeus wrote of Charlemagne “It is indeed certain that he sought out learned men and celebrated teachers from all parts of the world, and induced them to accept his invitation by rewards and honours.” He wished to establish two kinds of schools, the less and the greater. The less were to reside in Bishop’s places and monasteries; the greater were for public places and for the education of students of every rank and class. He found examples of large public schools in the Ancient Schools of Athens, Alexandria, Rome, Constantinople and Berytus. In the Benedictine monasteries he found examples of institutions with two kinds of schools, a greater and a lesser, according to their size. Laymen were also educated in the monasteries, but many of the most clever embraced the monastic life, and Kings had to seek monks to run the civil administration.

Charlemagne wished for lesser schools to be retained or set up in Bishops’ palaces but with a limited number of subjects. Instead he sought the creation of three schools of higher and public learning in important cities in his empire: Paris, Pavia and Bologna.

Newman will continue to describe the development of the University of Paris, the first medieval university and the unique contribution of Christianity to this great work.