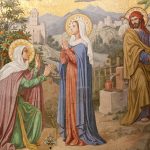 At Mass this coming Third Sunday of Advent, Gaudete Sunday, the entrance Antiphon will instruct us, “Rejoice in the Lord always; indeed, I say rejoice. Indeed, the Lord is near.” The first word is “Gaudete,” the Latin equivalent for the first Greek word in the Angel Gabriel’s greeting to the Virgin Mary: “Chaire,” or “Rejoice.” The Church shares Mary’s joy: the glory of God is near, is within us. Mary models humble reception of God as the path to true wisdom and greatness; but there are many things that tempt us to stray from this humble path. John Henry Newman’s 1830 sermon, “The Self-Wise Inquirer,” offers a frank examination of these temptations.

Newman’s sermon distinguishes between being “wise in this world” and being wise in God, elucidated in St. Paul’s first letter to the Corinthians, 3:18-19:

Let no man deceive himself. If any man among you seemeth to be wise in this world, let him become a fool, that he may be wise. For the wisdom of this world is foolishness with God. For it is written, He taketh the wise in their own craftiness.

A subtle self-deception can lead even the well-meaning into self-confidence and self-conceit by “trusting our own wisdom.” However, it is not always wrong to trust our own judgment. Two kinds of wisdom are not sinful in themselves: reliance on the authority of Conscience and Scripture. Newman defines Conscience as all people’s natural duty to acknowledge moral and religious truth. It is the mechanism by which all men, deep down, intuit ultimate accountability before the Creator. We can rely on Conscience and Scripture, “without incurring the sin of self-confidence” because “they come from the All-wise God.”

On the other hand, Newman says the world-wise man relies on wisdom not endowed by nature, but on artificial “industry, ability, and research.” This gives rise to vanity and elitism—a false truth accessible only to the self-wise inquirer, or to a select and enlightened few. This false wisdom fails to see fundamental truths as revealed by God and available to all. Newman describes how this man will become “impatient” with Scripture and Revelation, fearing it will “interfere with his own imaginary discoveries.” Newman cites St. Paul, who chides the Corinthians for being full of their own notions, rich and reigning as “kings without us,” out of sync with the Apostolic teaching that extends from Christ’s doctrine (1 Cor. 4:8). Newman encourages us, in reference to Matthew 11:25, to become again like little “babes” in our humble, obedient and primary reliance on religious and moral truth, not primarily on our intellectual discoveries and formulations.

Newman then assesses how we might inadvertently find ourselves relying upon worldly wisdom. As children we innocently recognize the goodness of moral and religious obedience. As we grow, we experiment with our fledgling reason, and disobedience of the first and fourth commandments often coincide—we fail in belief and fail in obeying our parents. We rebel and rise “against the authority of Conscience,” the beginnings of apostasy and vanity. Our “disobedience becomes its own punishment,” and our intellects blind us to the humble truths of the faith. Newman sees this as an all too common problem: “intellectual power” tends to “unfold amid the neglect of moral truth.” Professed faith tends to become a mere matter of “words, ideas, and principles” with no obedience, leaving  “an indelible evil character upon our heart, a judicial hardness and blindness.” Through undervaluing the Conscience, one learns to “despise and hate” it.

But there is an even greater danger: late in life, one might strive to return to the faith that had been spurned, but still lack ears to hear the Conscience. Worldly wisdom still infects the soul, masked in the language of a merely intellectualized, notional system of loosely Christian ideas. Still self-deceived, this person seeks to “gain religious knowledge merely by his reason,” but does not obediently submit to the moral and religious teachings of God revealed in Christ and expounded by the Church.

Even in the fervor of a return to faith, one might profess heresy by ignoring the fundamental moral and universal nature of faith, conversion, and reformation. It is by obedience—by listening to the word of God and doing it—that we are saved, not by an impressive grasp of intellectual notions about faith (cf. James 1:22-25).

This Advent, we are challenged by Newman to listen to  the “aboriginal Vicar of Christ in the soul” (cf. “Letter to the Duke of Norfolk, 5), our Conscience, the objective sense of God’s religious and moral commands in our hearts, informed by Scripture and the teachings of the Church.

My soul magnifies the Lord,

and my spirit rejoices in God my Savior,

for he has regarded the lowliness  of his handmaiden.

For behold, from henceforth all generations will call me blessed;

for he who is mighty has done great things for me,