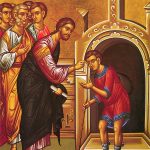 Throughout his life, as both and Anglican clergyman and a Catholic, St. John Henry Newman was a model for holiness in the modern era. It can be overwhelming to confront the wounds and sins in our world and hearts, but Newman’s sermon “The State of Salvation,” composed around 1840, offers encouragement that, in Christ, the Christian is actually made holy, not merely declared to be so.

First, Newman draws upon Ephesians 4:24 to reflect on how we are “new men” in Christ, a phrase he no doubt relished. Newman’s “new man” is truly righteous, truly holy, because he is made new by God in baptism. The Christian truly is a “new creation,” lives in a “new world.” Newman cites copiously from the New Testament to show the unambiguous way in which the Christian is utterly different than his native, natural state by virtue of adoption into Christ, more different from his natural state than an animal is different from a human, an utterly “new creature” in Christ. As a foundation for holiness, we can trust that we are indeed new creations in the new world of Christ’s Kingdom.

Second, living the baptized life, we can be sure that we have the power in Christ to quite simply stop sinning. To live in a “state of salvation” is not merely going to heaven; it is a state here and now in this life. According to Newman, many presume that mere faith blots out all sin, “that faith, if they have it, blots out their sins as fast as they commit them.” This is, quite simply, unbiblical. The Scriptures plainly portray that salvation “is a state in which power is given us,” by the grace of Christ, “to act rightly, and therefore punishment falls on us if we act wrongly.”

Newman comments on the life of Christ, who heals and forgives people “that they might not sin again.” He refers to Christ’s parables, in which there clearly are those who “continue in God’s favor, and those who lose it.” And he cites heavily from the New Testament authors, especially 1 John, to show that “Whoever is born of God sins not” (1 John v. 18). The evidence abounds to any attentive reader of the Scriptures: “there is no such person under the Gospel as a ‘justified sinner,’ only sinners and ‘justified saints.’ The Christian is one who “has ceased to be a sinner,” who shares in a glorious, heavenly communion; but those who persist in “willful sin” are those who leave the Christian path, who are “thrown out of grace.” The Bible’s portrait of a Christian is that of one who persists in the righteousness given by Christ; if we fall into sin, we might slip into the “skirts of the kingdom,” but always have recourse to God’s mercy, and can turn our gaze heavenward again, lest we fall further back into the lost darkness of the world. We must always be careful to stay on the progressive path of holiness.

But this does not mean that we merely avoid sin; the exciting adventure of holiness is, in Christ, to do good. To serve the world about us, to serve God and to serve our Church, requires simply that we abide in God’s merciful presence, listen to the promptings of the Holy Spirit, and continually deepen our knowledge of Him through prayer and study. This does not mean that all need to be theologians; rather, Newman thinks that in a world of doubt and uncertainty, “any child, well instructed in the catechism, is, without intending it, a real missioner.”

To know the faith is already to be on mission for the faith, in small and humble ways. Truly made sons of the Father, truly made righteous and holy, the Christian ever mindful of God and deepening in the knowledge of Him is a missionary, an evangelist, an apostolic messenger with good news of healing for the wounds of the world. Newman was a master at diagnosing the wounds of our time, and invites us to consider the power we have in Christ to heal them.