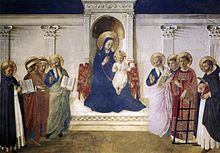 John Henry Newman comments on a title of the Virgin Mary, The Virgin who is to be Proclaimed, that at first glance is not as self-evident as other titles. He gives us the reason for this title: “because sin had no part in her; because, through the fulness of God’s grace, she never thought a thought, or spoke a word, or did an action, which was displeasing, which was not most pleasing, to Almighty God.”

As an Anglican Newman followed the custom of acknowledging the Virgin Mary as the Mother of God but without invoking her intercession. He was concerned that in Catholic countries devotion to Mary supplanted recourse to Jesus Christ, the one mediator between God and men. He later discovered that devotion to Mary was instead a sure way of growing in love for Jesus Christ, and of protecting various important beliefs such as Christ’s divinity and holiness. In this short reflection Newman also notes how the preaching about Mary developed gradually in successive ages, advancing from one truth to another.

Virgin Mary, as your children we rejoice in all the truths that are proclaimed about you.

May 4
Mary is the “Virgo Prædicanda,” the Virgin who is to be Proclaimed

MARY is the Virgo Prædicanda, that is, the Virgin who to be proclaimed, to be heralded, literally, to be preached.

We are accustomed to preach abroad that which is wonderful, strange, rare, novel, important. Thus, when our Lord was coming, St. John the Baptist preached Him; then, the Apostles went into the wide world, and preached Christ. What is the highest, the rarest, the choicest prerogative of Mary? It is that she was without sin. When a woman in the crowd cried out to our Lord, “Blessed is the womb that bare Thee!” He answered, “More blessed are they who hear the word of God and keep it.” Those words were fulfilled in Mary. She was filled with grace in order to be the Mother of God. But it was a higher gift than her maternity to be thus sanctified and thus pure. Our Lord indeed would not have become her son unless He had first sanctified her; but still, the greater blessedness was to have that perfect sanctification. This then is why she is the Virgo Prædicanda; she is deserving to be preached abroad because she never committed any sin, even the least; because sin had no part in her; because, through the fulness of God’s grace, she never thought a thought, or spoke a word, or did an action, which was displeasing, which was not most pleasing, to Almighty God; because in her was displayed the greatest triumph over the enemy of souls. Wherefore, when all seemed lost, in order to show what He could do for us all by dying for us; in order to show what human nature, His work, was capable of becoming; to show how utterly He could bring to naught the utmost efforts, the most concentrated malice of the foe, and reverse all the consequences of the Fall, our Lord began, even before His coming, to do His most wonderful act of redemption, in the person of her who was to be His Mother. By the merit of that Blood which was to be shed, He interposed to hinder her incurring the sin of Adam, before He had made on the Cross atonement for it. And therefore it is that we preach her who is the subject of this wonderful grace.

But she was the Virgo Prædicanda for another reason. When, why, what things do we preach? We preach what is not known, that it may become known. And hence the Apostles are said in Scripture to “preach Christ.” To whom? To those who knew Him not—to the heathen world. Not to those who knew Him, but to those who did not know Him. Preaching is a gradual work: first one lesson, then another. Thus were the heathen brought into the Church gradually. And in like manner, the preaching of Mary to the children of the Church, and the devotion paid to her by them, has grown, grown gradually, with successive ages. Not so much preached about her in early times as in later. First she was preached as the Virgin of Virgins—then as the Mother of God—then as glorious in her Assumption—then as the Advocate of sinners—then as Immaculate in her Conception. And this last has been the special preaching of the present century; and thus that which was earliest in her own history is the latest in the Church’s recognition of her.