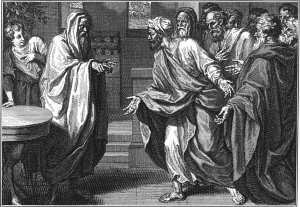 No one likes to wait, and if made to wait long enough, many of us start to worry or panic.  We don’t think the doctor will see us on time, we wonder if the job we desire will ever come our way, we doubt God will help us find a spouse or provide for our means.  Like our lives, the lives of the patriarchs were full of waiting. Abraham did not want to wait for the son God promised, so he fathered Ishmael by a servant; but he would have to wait until he was 100 years old for his wife Sarah to give birth.  In his youth, Moses tried in his own strength to rescue the Israelites, but he only succeeded in murdering an Egyptian and fleeing to the country, where he tended livestock. This he did for forty years, until he was 80 years old. It was then that God called him through the burning bush to go back and deliver his people – this time through God’s strength instead of his own. 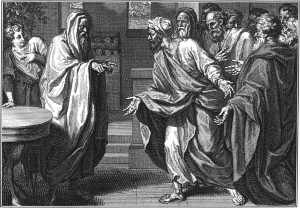 The history of Israel is no different, as Blessed John Henry Newman recounts in his sermon, “The Willfulness of Israel in Rejecting Samuel.”  The Israelites had been instructed by God always to wait for His plans, directions, and signals, before acting. God’s presence in the cloud by day and pillar of fire by night shepherded Israel through the wilderness.  Upon entering the land of Canaan, they were told that God would fight their battles for them.

Yet, repeatedly, “They failed most conspicuously in that very point in which obedience was most strictly enjoined them,” Newman says, by erecting the golden calf, trying to return to Egypt, exacting tribute from conquered foes, and taking a king for themselves after the pattern of their pagan neighbors. In all these cases, their wilfulness – that deliberate, stubborn attempt to do what one wishes against the command of higher authority – would precede their ruin. “It is observable, moreover, that they were the most perversely disobedient at those times when Divine mercy had aided them in some remarkable way,” as when, after 400 years of silence, God spoke to Samuel.

Samuel came to the Israelites like water in the desert.  Here was a boy who spoke with authority, even rebuking his elder priest through the word of the Lord.  He was famous in Israel as a prophet, and when he confronted them to destroy their idols and serve the living God, they listened, and God rescued them from the Philistines.  Not long after, they demanded a king. “By what strange infatuation was it that they sought for a king to ‘fight their battles,’ when, through the whole course of Samuel’s government, it was so evident that God’s power alone had subdued their enemies?” Newman says.

“There was one additional aggravation of their sin; they had really been promised a king … [but wanted to do] things in their own way instead of waiting for God’s time. The fact that God had promised what they clamoured for, and merely claimed to choose the time, surely ought to have satisfied them. But they were headstrong; and He answered them according to their wilfulness.”

Here is a brief and light sketch of Israel’s willfulness and disobedience, so frustrating to read at times.  How could they see the sea opened before them one moment, and moments later worship idols?! How could they doubt God?  Yet those Scriptures, like a mirror, reveal and accuse our own wayward hearts. Has God not delivered us from countless trials and sufferings, besides rescuing us from sin and eternal death?  But we so quickly doubt today the God who saved us yesterday. Lord, we are weak, please help our unbelief.

In Newman’s time, at the time of this sermon, the Church was under attack, as it is in our own day.  Newman writes, “Certainly we have not, at the present time, learned the duty of waiting and being still. Great perils, just now, encompass our branch of the Church; here the question comes upon us, as a body and as individuals, what ought we to do? Doubtless to meet them with all the wisdom and prudence in our power, to use all allowable means to avert them; but, after all, is not our main duty this: to go on quietly and steadfastly in our old ways, as if nothing was the matter?”

What about us? Have we learned to trust in God, amid this present ecclesial crisis and the many obstacles in our personal lives?  At times it can look bleak, but when doubts assail us, God assures us: “Be still and know that I am God.”