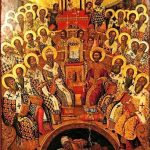 The Church has recently been proclaiming the Gospel of St. Matthew in her lectionary, in which we hear Jesus echoing the words of the prophet Hosea: “I desire mercy, and not sacrifice,” (Matthew 9:13), spoken to the Pharisees as they criticized Christ for associating with tax collectors and sinners. We are indeed today in need of accepting and giving much mercy; but St. John Henry Newman’s sermon, “Tolerance of Religious Error,” reminds us that it is not always merciful to avoid speaking the truth. God’s mercy must include the fullness of the Gospel Christ proclaimed, aimed at bringing sinners to repentance – which includes truthful witness to and proclamation of the faith and morals God has entrusted to us. For much of his life, Newman was concerned about the Church’s potential failure to fulfill her apostolic vocation in the world, to preach the good news in the face of many cultural challenges. So he does not hesitate to say that “religious error” in faith and morals cannot be tolerated, and is in fact not tolerated by God, who reveals to mankind the fullness of his truth and calls us to it unstintingly.

Newman’s occasion for these reflections was the feast of St. Barnabas, in whom he sees an example of holiness wrought out of personal character,  even personal flaws. St. Barnabas’ particular example of both holiness and failure contains an important lesson. Newman begins by rejoicing in the utterly unique nature of the Christian faith – that we are given divine grace without destruction of “respective peculiarities of temper and character” which may include “failures and errors which may be our warning.” St. Barnabas’ unique character, as an apostolic partner with St. Paul – in some measure a “founder of the Church of Antioch,” and noted for bringing encouragement and consolation (his name means “Son of Consolation)” – nonetheless was prone to specific excesses of tolerance: “indulgence towards the faults of others … over-easiness in a matter of doctrine [and] conduct.”

In matters of doctrine, St. Barnabas followed St. Peter’s bad example by withdrawing from eating with Gentiles in Antioch when members of the Judaizing sect arrived, out of cowardly “dissimulation,” not wanting to appear to the Judaizers to entertain Gentile Christians (Gal. 2.12-13). In matters of morals it was his “indulgent treatment of Mark,” St. Paul’s former Apostolic companion who abandoned the mission to Pamphylia, most likely out of fear of persecution. St. Paul did not want to admit Mark back into their apostolic company because of this cowardly flaw; yet St. Barnabas did, causing a rift between St. Paul and St. Barnabas that led to their own departure from each other (Acts 15:37-38).

St. Barnabas’ overindulgent toleration of laxity in faith and morals, St. John Henry Newman thinks, is an example “of warning to us” of “how the highest gifts and graces are corrupted in our sinful nature.” Of course, St. Barnabas’ eventual sanctity is without question; however, perhaps God in his providence allows saints to fall into error and sin in order to do precisely as Newman suggests: serve a warning to future generations of how, if we fail to look to God and “look towards ourselves” only for a moment, like St. Peter on the sea, we will find even our “excellent tempers” fallen into some kind of “extreme or mistake.”

Newman then goes on at length to apply St. Barnabas’ negative example as a problem he found rampant in his time that persists in ours: mistaking “thoughtful kindness” for charity, a “kindness” that degenerates into “weakness” and toleration of error and sin in the name of conciliation or avoiding conflict. Being nice becomes a thin veneer masking a cowardly failure to “do what is right and just” in keeping with what God has revealed. C.S. Lewis, in his famous book Mere Christianity, reminds us that the Gospel is not merely about being nice and avoiding conflict at all costs: “We must not suppose that even if we succeeded in making everyone nice we should have saved their souls. A world of nice people, content in their own niceness, looking no further, turned away from God, would be just as desperately in need of salvation as a miserable world–and might even be more difficult to save.” Newman would agree, and would more forcefully say that part of the truth we must proclaim includes God’s “wrath as a real characteristic of his glorious Nature,” his real displeasure with sin, his serious plan to judge the good and the evil, the “narrowness of the way of life, the difficulty of attaining heaven, the danger of riches, the necessity of taking up our cross, the excellence and beauty of self-denial, the hazard of disbelieving the Catholic faith, and the duty of zealously contending for it.” Jesus Christ himself preached all these things unflinchingly; why should we not, simply because they are difficult?

Newman describes how we must preach the “truth in love” by avoiding two kinds of false love born out of mere niceness: “indulging those who should be chastised,” and “preferring their comfort to those who are really deserving [of comfort].” It is not in fact merciful or loving to tolerate religious error. Just as it would be unconscionable to warn a misguided or blind pedestrian about oncoming traffic, the true people of God whom Christ calls to himself fail in their God-given duty if they do not, in love, accurately instruct others about the true demands of heaven. We can be a “tolerant Church” only in the sense that we refuse to use physical force or violence; but the Church cannot by her nature be “tolerant of error,” heresies in faith or morals.

Newman is being very serious here; he goes so far to say that he sees “no hope of my country” until a “zeal and holy sternness” would arise. He thinks that St. Barnabas’ bad example is instructive for three kinds of false forms of love in his time: “expedience,” or watering down moral questions into an “instinct of mere benevolence,” mere “excited feelings,” and mere “speculation” separating “moral perfection from action.” In each of these cases the realities of sin, evil, judgment, and the need for atonement wind up left out, and real love is replaced by kind thoughts and feelings or permissive relativism.

Trusting in God’s mercy includes embracing his goodness as well as his “severity” against sin, of really accepting that he wants to redeem us from the evil and sin in our hearts. God in his wisdom gives us saints like St. Barnabas, who provides an example of how to battle against our failings, and how to fall and still, by God’s mercy, get back up and shoulder our crosses again.