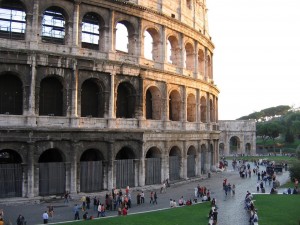 Newman concludes this series of short essays with a look at seminaries. The first seminaries for the formation of diocesan clergy were episcopal schools attached to cathedrals that later gave rise to the universities. From the 5th century the Lateran Cathedral in Rome had a school. Newman describes it as follows: “Strict as a monastic noviciate, it nevertheless included polite literature in its course; and a library was attached to it for the use of the seminarists.” He lists of some of its noted students that include “some of the greatest Popes, St. Gregory the Second, St. Paul the First, St. Leo the Third, St. Paschal, and St. Nicholas the First.” This school continued despite the Barbarian invasions of Italy and in the 13th c. St. Thomas Aquinas and St. Albert the Great lectured in its halls. In other parts of Europe the teaching at the cathedral schools was interrupted until the revival in education led by Charlemagne.

Newman writes of the changes that occurred with the rise of universities: “when Universities were established, in order to preserve the equilibrium between clerical and lay education, it was decreed, by the authority of the Canons, that secular learning should be studied in the Seminaries, and that each Cathedral should maintain masters for its teaching. It was foreseen that, unless this was done, Universities would supply a higher and a wider education than the Episcopal Schools; and that the clergy would either become inferior to the monks and the laity, or would be drawn within the precincts and influence of Universities.”

The universities, however, drew more students and teachers so that colleges for ecclesiastical students arose in the neighbourhood of the universities and cathedral schools ceased to exist. Those who would have studied in seminaries began to live in colleges or lived in the houses of religious orders. Medieval saints such as t. Raymund, St. John of Matha, St. Thomas of Canterbury, St. Edmund, St. John Nepomucene, St. Caietan, St. Carlo, St. Ignatius and his companions, or St. Francis of Sales were ordained a universities without seminary training and by the Council of Trent seminaries had almost ceased to exist. The candidates for the priesthood had to learn and find religious training on their own.

Furthermore, Newman writes: “There would be danger to their faith and religious temper, as well as to their morals. In Universities, subjects of every sort were disputed publicly; and boys, who ought to have been schooled at a Seminary in distrust of the intellect and modesty of speculation, were suffered to imbibe a critical, carping, curious spirit, most unbecoming in an ecclesiastic, on the interpretation of difficulties of Scripture, or on the deepest questions of theology. And the state of things became still more grave, when Protestantism arose, and its adherents found means of introducing themselves into the Professorial chairs.”

The Council of Trent sought to put an end to this state of things by restoring episcopal seminaries and suppressing ecclesiastical colleges in universities. It allowed for poorer dioceses to unite and establish a provincial seminary, providing sufficient means to offer quality education with a university character. Newman notes that Maynooth College in Ireland would be an example of this type of seminary. In a similar manner Pope Pius IX established in a Rome the Seminario Pio for students from dioceses in the Pontifical States. In the early 20th c. it would be joined to the Major Seminary of Rome.

Newman ends his essays with a look at L’Ecole de Hautes Etudes in Paris, today L’Institut Catholique. This school, opened in 1845, was located at the Carmelite convent, the place of the martyrdom of more than a hundred clergymen during the French Revolution. The object of this school was to provide Professors for the petits seminaires of France. It was also described as “a novitiate of ecclesiastics intended for teachers of the young clergy.” Early on the students studied languages, literature, history as well as various physical sciences. The institution was like a university and today is also known as the Catholic University of Paris. Laity was admitted for studies and received a sound religious education. Some students went on for studies at the Ecole Polytechnique or other government schools.

Although Newman notes the ebb and flow of history and the power of evil attacking the Church he has hopes for its educational institutions. With institutions such as L’Ecole de Hautes Etudes in mind, he confidently writes: “still we may surely encourage ourselves by a thousand tokens all around us now, that this is our hour, whatever be its duration, the hour for great hopes, great schemes, great efforts, great beginnings. We may live indeed to see but little built, but we shall see much founded. A new era seems to be at hand, and a bolder policy is showing itself.”

According to him the Church was strong to “recommence the age of Universities.” At the time he wrote Louvain had recently revived and there were prospects for a new University of Paris, and a university in Austria while the University of Ireland, under his leadership, took its first steps. As in Newman’s times today the Church and Catholic institutions continue to give life to new universities throughout the world: a sign of its perennial vitality and mission. The challenge, as in Newman’s time, is to maintain the Catholic spirit of the Medieval University and foster the unity of universal knowledge while at the same time form the moral lives of its students and prepare them for their work in society.