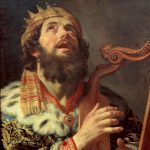 As St. John Henry Newman is fond of saying, God has called each of us to some particular role, some definite duty. But the path of our vocation will not be strewn with rose petals and gilded with gold. It will often include suffering and trial, which is also to say, testing. Our way may not be easy. Our faithfulness will be tested.

Saul, despite being called to a new role in an unfolding chapter of Israel’s history, failed such a test. Israel rejected God as their immediate king, so an earthly kingship was instituted, such that “their chief ruler was no longer a mere organ of His power and will, but had a certain authority entrusted to him, more or less independent of supernatural direction; and acted, not so much from God, as for God, and in the place of God.” The king of Israel was now to be a viceroy of God on earth, in a manner much different than that of Moses or the prophets. Yet Saul did not pass the test of worthiness for such a role. Allured by worldly success and vanity, he lapsed into idolatry and infidelity to his calling. In his sermon, “The Early Years of David,” however, St. John Henry notes that David succeeded where Saul failed. David is a supreme model in his distinct gift, his charism, of “fidelity of the trust committed to him,” of “fidelity to Almighty God.”

David is “Most favored among the Saints” for many reasons: “principal type of Christ,” author of many sacred psalms, chosen king to prepare God’s people for the gospel and suppress idolatry. But he is preeminent in one particular “temper of mind” in which the Isrealites, Saul his predecessor, and human nature itself is “deficient.” David displays an “affectionate, a thankful, a loyal heart towards his God and defender, a zeal which was as fervent and as docile as Saul’s was sullen, and as keen-sighted and pure as Balaam’s was selfish and double-minded.” David is faithful to God’s promises, and thus retains the seal of the Holy Spirit, through a wide diversity of human circumstances as he waits for the fulfillment of those promises. Thus, David is a preeminent example for us who, in St. Paul’s words, in Christ strive for faithfulness “in whatever state,” whether in “plenty [or] hunger, abundance [or] want” (Philippians 4:11-12).

David is chosen to replace Saul’s wickedness although he is Jesse’s youngest son. From Samuel’s anointing on, the Holy Spirit comes upon David and departs from Saul. David’s kingly office, imparted by the power of God, and not man, grows in him supernaturally even from a young age. An “evil spirit” frequently attacks Saul, a sign of the Holy Spirit’s departure from him and God’s “judgment upon him,” yet the Spirit also guides David’s “tongue and hand” to sing “sacred songs [that] become a medicine to Saul’s diseased mind.” Further, David is blessed with valiant deeds, a “public life” of heroism begun with the slaying of Goliath. These are a sort of trial, but St. John Henry argues David proves his mettle here more in the “patience” to allow God to fulfill the promise of kingship in his time, to resist the temptation of ambition, unlike Jeroboam who was promised kingship but “was tempted to seize upon it in his own way, and so forfeited God’s protection.” David maintains his faithfulness to God, patiently waiting while God fulfilled his faithful promises in His own time.

While David’s heroism endears himself to Saul in degree, Saul’s jealousy is kindled by David’s growing success and reputation, such that David undergoes his severest trial: he is driven out of the kingdom by Saul’s wrath, and becomes a wanderer exiled from the very land he was to rule. David even became head of an “irregular band of men,” cut off from more fruitful society, seeking the refuge of the foreign King Achish of Gath. Yet in these years of wandering he exhibits “eminent obedience and manifold virtues … a witness for Almighty God” in the midst of suffering. His exile continues for seven years, and he is even personally hunted by Saul. Finding Saul sleeping in a cave, David could have avenged his slanderer and detractor, yet attempts to prove his “integrity” by cutting off a corner of Saul’s robe, and later begging him for mercy and  showing the utmost of faithfulness and respect to God by refusing to slay God’s anointed.

It is here that Newman concludes that, just as Abraham’s “especial grace,” or “gift,” was “faith,” Moses’ was “meekness,” and Joseph’s was “self-mastery,” the special gift of David in light of the “purpose for which he was raised up” was “fidelity to Almighty God in the trust committed to him.” This fidelity is marked by the presence of the Holy Spirit from start to finish, whose presence does not depart because David waited trustingly and lovingly for God to accomplish his promise in due time. David’s fidelity, his trust, was “firm, uncompromising, single-hearted devotion to the cause of his God, and a burning zeal for his honor.”

St. John Henry notes a parallel in David’s story to that of Joseph, who was rejected by his own brothers, imprisoned, yet in due time raised to power in Egypt. David “bore this trial of obedience well, in which Saul had failed,” eventually being entrusted with “discretionary power” to use in his Master’s service.” Scripture notes that after each trial, David continued to show wisdom and “prudence,” even when he had to return to his father’s sheepfolds for a time, or run for years from the wrath of Saul. He “kept his honor pure and unimpeachable” even while young, a time of life “especially exposed to the temptations of obedience.” He maintains a “modest deportment” after his successes, a simple faith and “unblemished loyalty” despite Saul’s wrath and slander, and thus becomes a universal model for faithful perseverance in devotion and obedience to God.

As members of Christ’s One, Holy, Catholic and Apostolic Church, we are given amazing, glorious promises. We share in Christ’s kingly, prophetic, and priestly role by virtue of our baptisms. We are sealed with the Holy Spirit in confirmation. We are called to overcome all sin in the confessional, and experience a foretaste of union with God in the Eucharist. And yet, perhaps, we are tempted to ambition, impatience, and even malice when the fulfillment of God’s promises seem delayed, especially as we witness the ravages of sin in our world, our own lives, and our own Church.

But let us learn from David to persevere in honorable patience, in prudent silence and humble obscurity, and to let God be the one to fulfill His promises in good time. St. John Henry’s parallel of David and Joseph calls to mind another St. Joseph, that Noble Son of the Royal House of David who, through years of trial, poverty, obscurity, and exile, maintained exclusive and zealous devotion to Our Lady and Our Lord. In the face of impossible odds he kept an unwavering, hopeful confidence that God would fulfill his promises in good time. By the intercession of these holy heroes, and that of St. John Henry Newman, let us do the same.