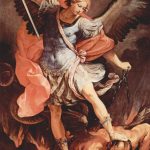 Lent is here, and while the world looks for reasons to celebrate during these cold months, we remember our Lord’s passion.  It’s fitting for this season to teach us this contrary spirit, for we are in this world but not of it, just as was our Lord who spoke these words.  When He came, Christ brought a new order contrary to the world order.  What men thought straight, He called crooked.  He said those who mourn, weep, and the poor are the blessed ones; and the happy, rich, and full are to be pitied.  He accused the human heart of sin, and offered mercy to the humble.  He did not gain salvation on a battlefield, but poured it out from a cross.  What was said of Paul and Silas was more true of their Master: He “turned the world upside down” (Acts 17:6).

In his sermon, “The Weapons of the Saints,” Blessed John Henry Newman explains the meaning of this new order summed in the words, “But many that first will be last, and the last first.”  These simple words of our Savior imply a principle of reversal confirmed by Scripture.

“Take, for instance, St. Mary’s Hymn, which we read every evening; she was no woman of high estate, the nursling of palaces and the pride of a people, yet she was chosen to an illustrious place in the Kingdom of heaven…St. Paul addresses the Corinthians in the same tone: “Ye see your calling, brethren, how that not many wise men after the flesh, not many mighty, not many noble, are called: but God hath chosen the foolish things of the world to confound the wise; and God hath chosen the weak things of the world to confound the things which are mighty; and base things of the world, and things which are despised, hath God chosen, yea, and things which are not, to bring to nought things that are: that no flesh should glory in His presence.” 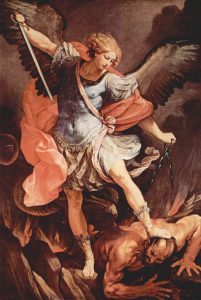 Slyly and slowly have the meek been inheriting the earth.  Humility, weakness, poverty – these are the weapons of the saints.  But are they our weapons?

Blessed Newman says many men live after the pattern of the world which convinces us to rest our hopes and dreams on temporal success and then causes us to despair.

“We have most of us by nature longings more or less, and aspirations, after something greater than this world can give. Youth, especially, has a natural love of what is noble and heroic…. But I am speaking of men before that time, before they have given their hearts to the world, which promises them true good, then cheats them, and then makes them believe that there is no truth any where [sic], and that they were fools for thinking it. But before that time, they have desires after things above this world, which they embody in some form of this world, because they have no other way at all of realizing them. If they are in humble life, they dream of becoming their own masters, rising in the world, and securing an independence; if in a higher rank, they have ambitious thoughts of gaining a name and exercising power.”

When Christ gets hold of us, He promises to fulfill our deepest and most innocent of desires.  He says “…you desire to be great, I will make you so; but observe how,—just in the reverse way to what you expect; the way to real glory is to become unknown and despised.”

The nature of this reverse course will be the subject of our next reflection.  Until then, we may examine our motives.  Do we have a longing for greatness and heroism, or have we sunk into the despair?  Could we be trying to fulfill these longings in worldly goods and temporal ambition?